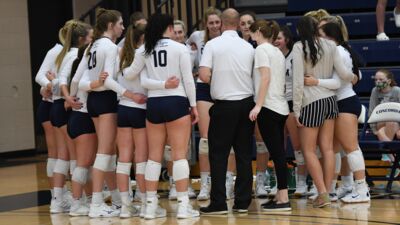 SEWARD, Neb. – The Concordia University Volleyball team will be more than 1,000 miles from home when first serve of the NAIA Volleyball National Championship Opening Round occurs on Saturday (April 17). Cheers rang out from the on campus Walz Conference Room on Monday when members of the team learned they would be headed to New Orleans. As an at-large national qualifier, the Bulldogs will travel to play Xavier University of New Orleans.

Head Coach Ben Boldt’s program will make a second straight appearance at the national tournament. Last season they went straight to the final site in Sioux City, Iowa, bypassing the opening round. In this year’s format, all 48 national qualifiers must compete in the opening round.

Travel plans are quickly in the works for Concordia, which did not play outside of the Midwest during this past fall or spring. Boldt had a simple message for his team in the short address that followed the national tournament announcement on Monday. Now is about making the most of the time they have leading up to Saturday’s match.

One of five GPAC teams to qualify for nationals, the Bulldogs will enter Saturday’s contest with an overall record of 15-4. They have been ranked 10th in the NAIA in all five national coaches’ polls released this spring. That ranking represents the highest for Concordia in the history of its program. Meanwhile, Xavier qualified for the opening round by winning the Gulf Coast Athletic Conference Tournament title.

As of the afternoon on Monday, a match time had not yet been announced. Fans will be allowed to attend Saturday’s match. Specific information about fan attendance will be disseminated when available.

Each opening round winner will advance to pool play at the final site, the Tyson Events Center in Sioux City. The action in Sioux City will run from April 27 – May 1.

·        Concordia will be making the third national tournament appearance in program history. The 2015 squad became the first Bulldog volleyball edition to qualify for nationals. The ’15 squad was defeated in the opening round while hosting Olivet Nazarene University (Ill.). Then in 2019, Concordia broke through with an advancement to the national round of 16 and claimed the program’s first two national tournament victories – over Montana Tech and the University of Saint Mary.

·        Xavier is making an appearance at nationals for the 10th time in program history. The Gold Nuggets will carry a record of 18-4 into Saturday’s matchup. Xavier is coached by Pat Kendrick, who is in her fourth season leading the program.