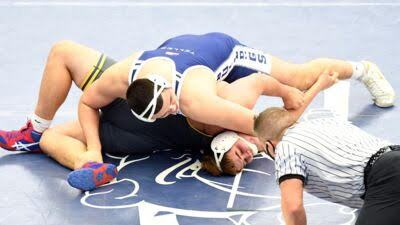 JAMESTOWN, N.D. – Half of the entire GPAC dual slate unfolded on Saturday (Jan. 30) in Jamestown, N.D., where the Jimmies hosted five of the conference’s nine wrestling programs. In its first action in two weeks, the Concordia University Wrestling team went 1-3 on the day while claiming a 23-22 win over Jamestown that came down to criteria. Ten different Bulldogs wrestled at least one match.

“We have to get better, plain and simple,” Calhoun said. “Obviously we’re missing a couple of weights, but that’s no excuse to make the mistakes we’re making. As always, our effort was there. I’m not disappointed with our guys’ effort in any way. They all wrestled hard every match. We’re making mistakes that we’re going over in the room every day and we’re not doing it on the mat. We have to figure out how translate the practice room onto the mat.”

The Bulldogs had open weights at 125 and 149 throughout the day. They managed to overcome the lineup gaps in the win over Jamestown by claiming six of the eight contested matches. With Concordia trailing 22-16 in team scoring, senior Oscar Ramirez-Garcia pulled out a critical 5-4 decision over Ivan Vargas at 197. Freshman Jacob Telles followed at heavyweight with a 3-1 win over Ian Howell. That left the team score knotted, 22-22. A tiebreaker point was added for the Bulldogs based on criteria (more match wins).

Other contributors to the team victory included freshman Jeaven Scdoris (major decision at 141), junior Issiah Burks (decision at 157), Tavoris Smith (decision at 165) and TJ Huber (pin at 174). Huber posted one of the team’s two pins on the day.

In the day’s final dual, half of the matches resulted in forfeits (three by Hastings). Concordia attempted to climb out of a 24-0 hole in the back half of the lineup. The biggest highlight was a first-period pin (11th of the season) for Telles, who wiped out Marco Valdivia. It was a nice way to bounce back for Telles, who had dropped his previous match by decision to the GPAC’s top-rated heavyweight, Brandon Antesberger of Doane.

Doane (7-0) and Briar Cliff (6-2) have proven to be two of the top teams in the GPAC. The ninth-ranked Tigers (guided by former Concordia and Midland head coach Dana Vote) won all but one match over the Bulldogs. Freshman Carter Willis eked out a 5-3 triumph in sudden victory at 133 to avoid a blanking. In the loss to the Chargers, Burks (major decision at 157) and Huber (decision at 174) put wins on the board for Concordia.

When the dust settled on Saturday, a quartet of Bulldogs had each notched two wins at the GPAC Duals: Burks, Huber, Ramirez-Garcia and Telles. Five Concordia wrestlers were credited with one victory apiece: senior Gabe Crawford, senior Cyrus Marshall, Scdoris, sophomore Tavoris Smith and Willis.

The final dual of the 2020-21 season will take place next Thursday (Feb. 4) when the Bulldogs host York College (6-3) inside Friedrich Arena at 7 p.m. CT. Concordia will attempt to avenge the 30-19 loss it suffered at York back on Oct. 30. The Panthers were situated just outside the NAIA top 20 in the latest national team rankings.