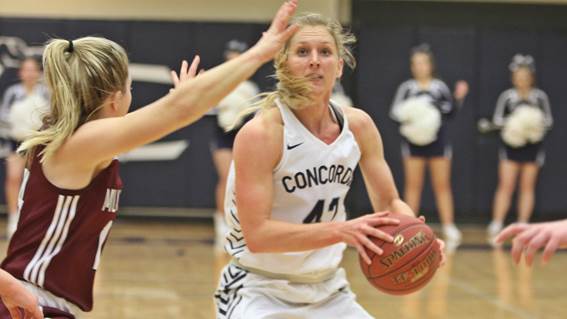 SIOUX CENTER, Iowa – After building a 24-1 advantage to begin Wednesday’s victory at Doane, the third-ranked Concordia University women’s basketball team raced out to a 9-0 lead and never trailed Saturday (Feb. 8) afternoon at No. 9 Dordt. The cold outside shooting of the Defenders (3-for-21 from 3-point range) was a major storyline – as were the 30 turnovers forced by the Bulldogs. It added up to a 74-56 road victory for Concordia.

Fourteenth-year head coach Drew Olson’s squad has now won 10 in a row, including the last three outings away from home. Concordia (24-2, 17-1 GPAC) remains one game behind Hastings (18-0 GPAC) atop the league standings.

“We just had a really good aggressive approach,” Olson said. “Defensively we were focused on what we wanted to do and played with a lot of energy. (Mackenzie) Koepke hit some shots early and Philly (Lammers) played very well. It was a great defensive start that really carried us.”

The Bulldogs were able to take Dordt out of its game and put the home team on its heels right out of the gate. Concordia cooled off in the second half, but its near 50 percent shooting over the first 20 minutes helped provide a commanding 46-28 lead at the break. Mackenzie Koepke played a major role in constructing that advantage. She nailed her first three attempts from 3-point range and tallied each of her 11 points in the first half.

The aforementioned defensive tenacity played a part in the Defenders (20-6, 12-6 GPAC) shooting just 30.4 percent from the floor. Star Erika Feenstra was held to less than half her scoring average at nine points on 3-for-8 shooting. The starting five for Dordt combined for a grand total of eight made field goals. Karly Gustafson led her side with 11 points off the bench.

That type of ineptitude wasn’t going to cut it against these Bulldogs. When the Defenders did manage to claw back within 12 points in the fourth quarter, Grace Barry emerged with a couple of nifty driving buckets as part of a 6-0 run. Concordia then put it away with defense. It surrendered only one field goal make over the last three-and-a-half minutes.

“This was one of the most focused games we’ve had,” Olson said. “It shows that we’ve keyed in on what’s important at this point in the season. We’re not looking ahead. We’re focused on the game plan. Today was a team effort. Everyone contributed. People came in off the bench and stepped up.”

Lammers topped the Bulldogs with 17 points to go along with her five rebounds, three blocks and two steals. Barry recorded 12 points, six assists, six rebounds and two steals. Colby Duvel also reached double figures with 12 points while MacKenzie Helman added eight points and four steals off the bench. Once again, Concordia did not get caught peeking ahead to next week. There’s no margin for error in yet another race for a regular-season conference championship.

The Bulldogs will be back at home on Wednesday for the anticipated rematch with second-ranked Hastings (26-0 overall). Tipoff is set for 6 p.m. CT from Walz Arena. In this season’s first meeting, the Broncos defended their home court in a 66-59 victory over Concordia on Jan. 8. That result snapped an eight-game series win streak for the Bulldogs. Hastings last won inside Walz on Nov. 26, 2013.