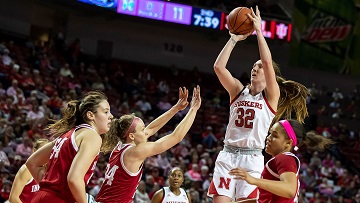 Nebraska sophomore Leigha Brown was voted the Big Ten Conference Sixth Player of the Year by both the conference coaches and media, when the league announced its end of the regular-season women’s basketball honors live on the Big Ten Network on Monday, March 2.

Brown, a 6-1 guard/forward from Auburn, Ind., led the Huskers in scoring with 14.2 points per game while coming off the bench in all 29 games during the regular season. She finished the regular season ranked 12th in the league in scoring and was the only non-starter to rank among the Big Ten’s top 25 in scoring. Although she did not start a game, Brown ranked fifth among the Huskers in minutes played throughout the season and fourth in minutes during Big Ten Conference games.

Brown was Nebraska’s leading scorer in 13 of 29 games in the regular season, including nine times in Big Ten action. She has been the Cornhuskers‘ top scorer in seven of the last 10 games, including five of her eight 20-point scoring performances on the season during that stretch. Brown has added 3.5 rebounds and 1.9 assists per contest on the year.

Cain, a 6-5 junior center from Middletown, N.Y., was also one of five players named to the Big Ten All-Defensive Team by both the conference coaches and media. Cain, who led the Big Ten in both blocks (3.6 bpg) and defensive rebounds (6.7 drpg) during the 18-game conference regular season, earned her second career spot on the Big Ten All-Defensive Team. She claimed her first appearance on the conference all-defensive unit as a freshman in 2018 when she set the Nebraska season record with 100 blocked shots.

Cain enters the Big Ten Tournament needing just two blocks to match her Husker season record. Her 98 blocks on the year are a Nebraska junior record and lead the Big Ten. Her 277 career blocks have shattered the previous Nebraska career record (238) and her career total also ranks 10th in Big Ten Conference history.

Cain has added 9.2 points and 7.4 rebounds per game on the season, ranking third among the Huskers in scoring while leading the team in rebounding.

In addition to the awards voted on by coaches and media, Husker senior Grace Mitchell claimed Nebraska’s Big Ten Sportsmanship Award. The 6-2 forward from Wellington, Kan., competed in 22 regular-season games for the Huskers in 2019-20. Mitchell, who is a three-time Tom Osborne Citizenship Team member, earned a prestigious Sam Foltz Hero 27 Leadership Award in 2019. Mitchell is a two-time Big Ten Distinguished Scholar and a two-time Academic All-Big Ten selection. She has played in 106 games in Husker career.