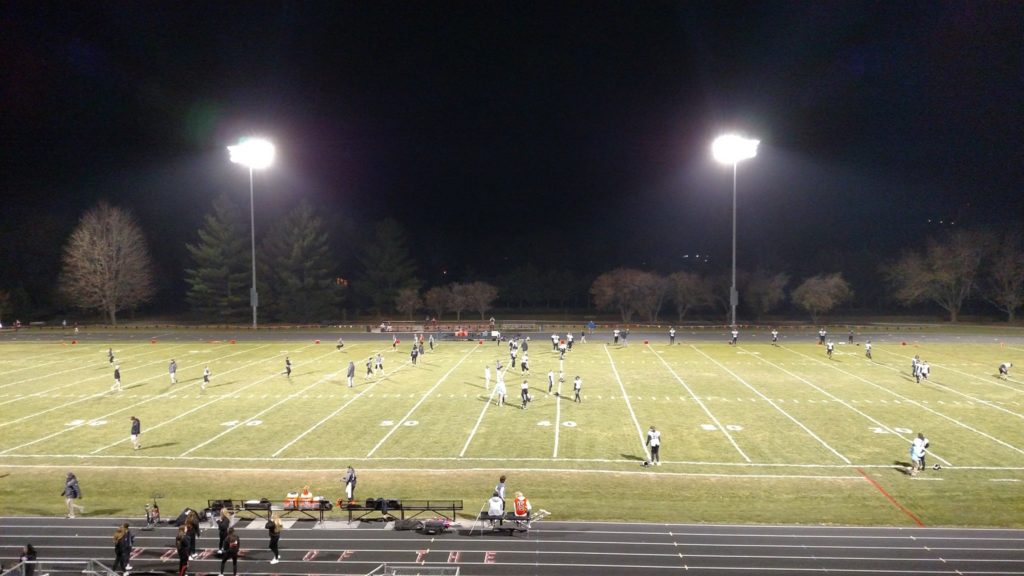 NORTH BEND – Bancroft-Rosalie/Lyons-Decatur won a shootout over North Bend Central 60-53 in the quarterfinal round of the Class C2 football playoffs Friday night in North Bend, in a game aired on 107.9 The Bull.

The game got off to a great start for the Tigers, as BRLD fumbled the opening kickoff, and NBC started on the BRLD 17. Austin Endorf caught a trick play pass from Cody Prohaska, and NBC led 7-0.

BRLD drove inside the NBC 40 before losing another fumble, giving the Tigers the ball at their own 35.

BRLD scored on its very next drive, a four-yard run from Kobe Lyons. The PAT missed and NBC led 14-6.

Both team exchanged punts on each of their ensuing possessions, before Lucas Vogt intercepted a pass from Endorf and returned it 65+ yards for a touchdown. The Wolverines failed in a two-point try, and NBC led 14-12 at the end of the first quarter.

The Tigers were forced to punt on their next drive, and pinned BRLD back at their own nine yard line. The Wolverines capped off the 91-yard scoring drive on a three-yard run from Will Gatzemeyer. Following the two-point conversion, BRLD now led 20-14.

NBC answered right back however, driving 58 yards and scoring on a one-yard plunge by Ethan Mullally. After the PAT, the Tigers were back on top 21-20.

BRLD failed on fourth down from the NBC 46, turning the ball over on downs.

BRLD started at their on 25, and scored with just 35 second left in the half on a five-yard pass from Gatzemeyer to Vogt. The two-point try was no good, and the game went into halftime with North Bend Central leading Bancroft-Rosalie/Lyons-Decatur 28-26.

NBC got the ball to start the second half, and closed out a 52-yard drive on a one-yard run by Mullally, taking a 36-26 lead.

BRLD started its next drive at the own 23 and finished things off with a 25-yard touchdown pass from Gatzemeyer to Vogt. The PAT missed and NBC led 36-32.

The Tigers kept their run of great starting field position going, taking over at their own 46. They would get down to the BRLD nine yard line, before Jarrett Poessnecker hit a 27-yard field goal, putting NBC up 39-32.

BRLD tied the score at 39-39 on its next drive thanks to a two-yard run from Gatzemeyer. That was the score at the end of three quarters.

Following a NBC fumble, BRLD took over at its own 44 yard line, and would score on a 10-yard pass from Gatzemeyer to Vogt. Following the PAT, the score now favored BRLD 46-49.

The Tigers tied things up on the next possession after Endorf found Pospisil for a 17-yard touchdown pass. The score was now 46-46 with 9:25 left in the game.

The Wolverines got the the NBC 41 before being turned away on a fourth down try.

NBC took over at its own 41 and regained the lead after a 19-yard touchdown run by Mullally. NBC now led 53-46.

BRLD pulled within a point after Lyons finished off a 68-yard drive on a four-yard scoring run. The PAT missed and the score was now NBC 53, BRLD 52.

The Tigers were forced to punt on their next possession, giving BRLD the ball on their own 45.

NBC took over at its own 37 with 1:44 left to play. The Tigers got to the BRLD 48 before fumbling the ball. BRLD recovered and would run out the remaining time, preserving the final score of Bancroft-Rosalie/Lyons-Decatur 60, North Bend Central 53.

For North Bend Central, Austin Endorf finished 20-17 passing for 257 yards with two touchdowns and one interception. Endorf also caught a touchdown pass on a trick play.

Gavin Peterson led the tiger defense with 10 tackles, including eight solo and two for a loss.

For Bancroft-Rosalie/Lyons-Decatur, Will Gatzemeyer was 19-33 passing for 313 yards and four touchdowns. Gatzmeyer also ran the ball 33 times for 229 yards and two scores.

Gus Gomez had 18 tackles for the Wolverines, including four solo and one for a loss.

Bancroft-Rosalie/Lyons-Decatur is now 10-1 overall, and will host Sutton in the Class C2 state semifinals next Friday night for a chance to go to the championship game.

Nebraska Extension webinar on cash flow strategies during the pandemic