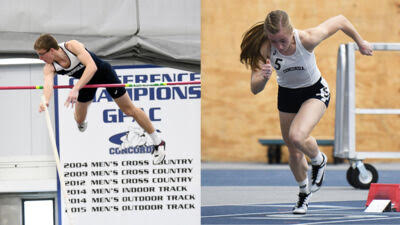 SEWARD, Neb. – As a capper to pre-championship competition, the Concordia University Track & Field program hosted the Concordia Indoor Invite on Saturday (Feb. 13) and emerged with a collection of 11 event titles. This marked the sixth indoor meet of the 2020-21 season, and the fourth that has taken place inside the Walz Fieldhouse. GPAC rivals Doane, Hastings and Midland (all nationally-ranked for both men and women) joined the Bulldogs in Seward.

Head Coach Matt Beisel’s squads began the meet with NAIA national ratings of No. 2 on the women’s side and No. 4 on the men’s side. The women’s team is gearing up to defend its run of three-straight GPAC titles (2019 indoor/outdoor and 2020 indoor).

“Overall we had solid results with some real highlights,” Beisel said. “Now it’s time to get our brains and our bodies ready for conference … There are some teams in the NAIA only getting one meet in before conference. We are definitely at a huge advantage compared to other places in the country. We have access to an awesome facility, we can practice indoors and we haven’t had to do a lot of travel. I think it’s been a huge advantage, and I’m grateful for it.”

At least for now, reigning GPAC and NAIA national 400 meter champion Rachel Battershell is back on top of the NAIA leaderboard. The junior from Wheatland, Wyo., blazed to a time of 57.19 (converted to 56.44 on the NAIA list) while outkicking a Concordia Invite field that included teammate Sarah Lewis (59.08). In the 60 meter hurdles, Lewis won the meet title in 8.90 with Battershell placing third in 8.99.

Both Battershell and Lewis figure to be big point scorers again next week as standouts on the track. Said Battershell, “It’s really fun. I’m so grateful to have to have teammates like Sarah. We push each other so much. Whoever comes out on top, we’re always learning from each other. We’re both so competitive so it keeps it fun.”

Lincoln Lutheran High School alum Josie Puelz has gone a perfect 6-for-6 in terms of winning pole vault competitions in each meet this season. She cleared 13 feet for the third-straight meet (13’ ½” on Saturday). Teammate Erin Mapson (11’ 6 ½”) also came in right at her season best for the deepest group of women’s vaulters in the NAIA.

While Puelz keeps winning in the women’s pole vault, junior Zach Bennetts has starred on the men’s side of the event. He equaled a personal best on Saturday by clearing 15’ 8 ¼” for a winning performance. It was also a breakthrough meet for freshman Zach Zohner, who vaulted 15’ 5” in another PR achievement.

Sophomore Kylahn Heritage has soared up the charts in the 1,000 meters after she clocked in at 2:59.96 (10 second PR) while taking first place at the Concordia Invite. A two-time GPAC Athlete of the Week, Heritage has won six individual races this indoor season. Additional victories on the track on the women’s side were delivered by Rylee Haecker (mile), Amie Martin (3,000 meters) and Kennedy Mogul (600 meters).

Elsewhere in the field events, freshman Amy Richert placed second in the high jump by leaping 5’ 4 ½,” just off a personal best. The deep group of Concordia women’s long jumpers placed 2-3-4 via the work of Katie Severt (17’ 11 ½”), Jamey Broman (17’ 9”) and Emily Loy (16’ 11 ¼”). Meanwhile, Cora Olson won the triple jump (35’ 1”) and also ran a 7.99 in the 60 meters. They continue to progress while adapting to new assistant coach Benjamin Hinckfoot’s training methods. In men’s competition, Wyatt Loga placed as the runner up in the high jump (6’ 5”). In his first career collegiate track meet, Jayson Frank cleared 6’ 3 ¼” in the high jump.

A national runner up in the heptathlon at the 2019 NAIA indoor meet, Cody Williams believes he’s starting to put things together at the right time from a health perspective. He placed second in the 60 meter hurdles and fourth in the pole vault on Saturday.

“It’s been a struggle off and on,” Williams said of putting behind last year’s injuries. “You’ll have a good week, you’ll have a bad week. This week I’m focusing in on the hurdles and the vault for this last home meet. I didn’t get to do any therapy last year because of COVID. It made it difficult, but the coaches, trainers and I worked pretty hard to get to where I’m at right now.”

A former member of the Bulldog baseball team, Cade Kleckner won the 200 meters in a time of 22.65. In the women’s 600 meters, Mogul, Jordyn Hilyard and Kailey Weichel each run under 1:43. The team’s top distance runner during cross country, Camden Sesna captured the win in the 800 meters (1:59.72) in his first opportunity to ever run the event in college.

The GPAC Indoor Track & Field Championships will unfold next Friday and Saturday (Feb. 19-20) in Sioux Center, Iowa. As meet host, Dordt will stage the conference championships at the Recreation Center on campus. The meet schedule can be viewed HERE.

Said Beisel, “The goal for next week is to score as many points as we can in as many events as possible. We want to win on the women’s side and be top three on the men’s side. We won’t know who will do each event thought the GPAC until Thursday (after entries are submitted).”