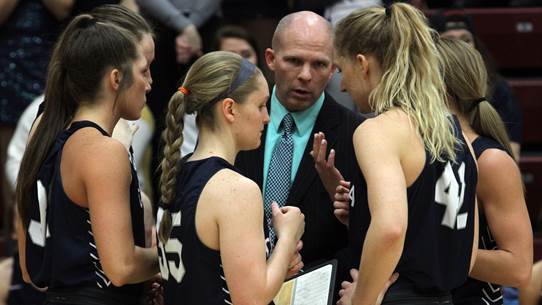 RIVER FOREST, Ill. – In round one of the annual Concordia Invitational Tournament, the Concordia University, Nebraska women’s basketball team rode a dominant third quarter performance to the winner’s circle as the CIT win streak remained intact. The third-ranked Bulldogs had some issues with free throw shooting, but their 42 turnovers forced took the wind out of the sails of Concordia University, Ann Arbor. The result was a 74-49 victory in action inside Geiseman Gymnasium in River Forest, Ill.

Head coach Drew Olson’s program has won 13 CIT games in a row, winning them by an average of nearly 30 points per game. CUNE moved to 19-2 overall this season.

“I just thought it was our focus (in the third quarter) and our aggressiveness to take advantage of what they were doing,” Olson said. “We did a great job defensively in the first half. We just weren’t playing well offensively. Once we settled in and calmed ourselves down we started playing really good basketball.”

After shooting just 31.6 percent (12-for-38) from the floor over the first 20 minutes, the Bulldogs turned on the jets with a third period that left the Cardinals in the dust. During that 10-minute stretch, CUNE outscored CUAA 28-7 and made 11-of-19 shots from the floor. Meanwhile, the Cardinals managed only two field goal makes the entire quarter. With 10 minutes to go, the Bulldogs owned an insurmountable 60-31 lead.

When this team needs to be pulled out of a bit of a lull, seniors Grace Barry and Philly Lammers are a trusted pair of stars to lean upon. Barry notched eight of her game high 20 points in the third quarter that included a pick-pocket of a steal and bucket. Barry finished with seven assists and six steals. Meanwhile, Lammers powered in 17 points and collected five rebounds, five steals and a blocked shot.

Early on, Tris’styn Williams (19 points and 12 rebounds) and the Cardinals (12-8) hung tight and even held a 23-22 lead late in the first half. That was before CUNE went on a 38-8 run. CUAA showed some life in the fourth quarter with a 13-0 run to get it started. Eventually the advantage creeped back above 20 points in a comfortable closing stretch.

This game featured plenty of statistical oddities. The Bulldogs somehow shot 9-for-29 from beyond the arc, but 9-for-22 from the foul line. Delani Fahey got going again by knocking down 3-of-4 shots from 3-point range for nine points. MacKenzie Helman chipped in six points and a pair of steals.

The reigning national tournament MVP, Barry relishes the opportunity to play in front of hyper-charged crowds such as this one. The energy will ramp up a little bit more on Saturday. Said Barry, “It’s a pretty awesome atmosphere. The team camaraderie is just awesome. We’re playing for a great purpose and I think it’s so cool that you can get so many competitive teams through the game of basketball, and we can also have fellowship together.”

Once CIT is in the books, it’ll be the stretch run of the GPAC season. Time for Barry and Lammers to take over. Said Olson, “Grace was phenomenal that first half. I felt like we were rattled and she was the one keeping us in the lead and doing some really nice things. Both her and Philly just dominated for a few stretches. They’re incredible players.”

CIT will continue on Saturday with the championship game getting underway at 5:30 p.m. CT. The Bulldogs are seeking the 30th CIT title in program history and the seventh in a row. CUNE has won the championship in 10 of 13 CIT’s during Olson’s tenure.