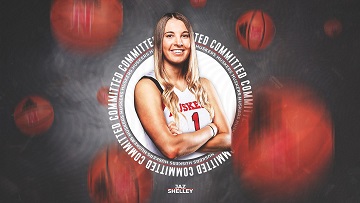 Shelley, a 5-9 sophomore guard from Moe (pronounced MO-ee), Australia, will have three seasons of eligibility remaining for the Huskers.

“We are extremely excited that Jaz is going to be part of our Husker family,” Nebraska Coach Amy Williams said. “We got to know Jaz really well during her initial recruiting process before coming to the United States from Australia. We think she is a great fit for our program and we can’t wait for her to get here and start growing with us.”

Shelley was selected as a member of the 23-player Australian Senior National Team (Opals) in 2020 and has extensive international experience. She played for the Australian U19 team at the 2017 FIBA Women’s World Cup, averaging 10.6 points and 3.6 assists. She scored a tournament-best 26 points with five three-pointers in a win over Russia. She added a game-high 23 points to go with eight rebounds and five assists in an upset of the United States at the 2016 FIBA U17 World Championship, powering Australia to its first gold at the World Championships for the first time in history. Shelley also played for Australia at the 2016 FIBA U18 Oceania Championship and the FIBA U16 Oceania Championship in 2015.

She becomes the third member of the Australian National Program on the 2021-22 Nebraska women’s basketball roster, joining sophomore Isabelle Bourne and freshman Ruby Porter. Bourne and Shelley were teammates for Australia’s Gems at the 2019 FIBA U19 World Championships that took silver after sending a showdown with Team USA into overtime.

Shelley appeared in all 33 games for Oregon as a true freshman in 2019-20, helping the Ducks to Pac-12 regular-season and tournament titles. She averaged 6.3 points, 1.5 assists and 1.0 rebound while hitting 42 percent of her three-point attempts. In her only start as a freshman, Shelley finished with 32 points while setting the Oregon single-game record by going 10-for-14 from three-point range in a win over UC Riverside (Dec. 16, 2019). Her 10 threes tied for the second-best total in NCAA Division I women’s basketball in 2019-20, and she was named the Pac-12 Freshman of the Week following her performance. She went on to score in double figures six times, including 17 points on 5-of-8 three-point shooting at Long Beach State. She added 14 points while going 4-for-4 from long range in a win over Arizona State (Feb. 9, 2020), and had 10 points on 4-of-5 shooting in a Pac-12 Tournament win over Utah (March 6, 2020).

In her second season at Oregon in 2020-21, Shelley played in 22 of 24 games for the Ducks with 11 starts. She missed Oregon’s first two NCAA Tournament games because of injury before competing against No. 8 Louisville in NCAA Sweet Sixteen. She had an assist and a steal in five minutes against the Cardinals. For the season, Shelley averaged 4.0 points, 1.7 rebounds and 1.9 assists. She scored in double figures three times, including a season-high 13 points on 5-of-8 shooting in a win over USC (Jan. 1, 2021) when she also tied a career high with five assists. She added 11 points in wins over Utah (Dec. 6, 2020) and Washington State (Dec. 21, 2020).