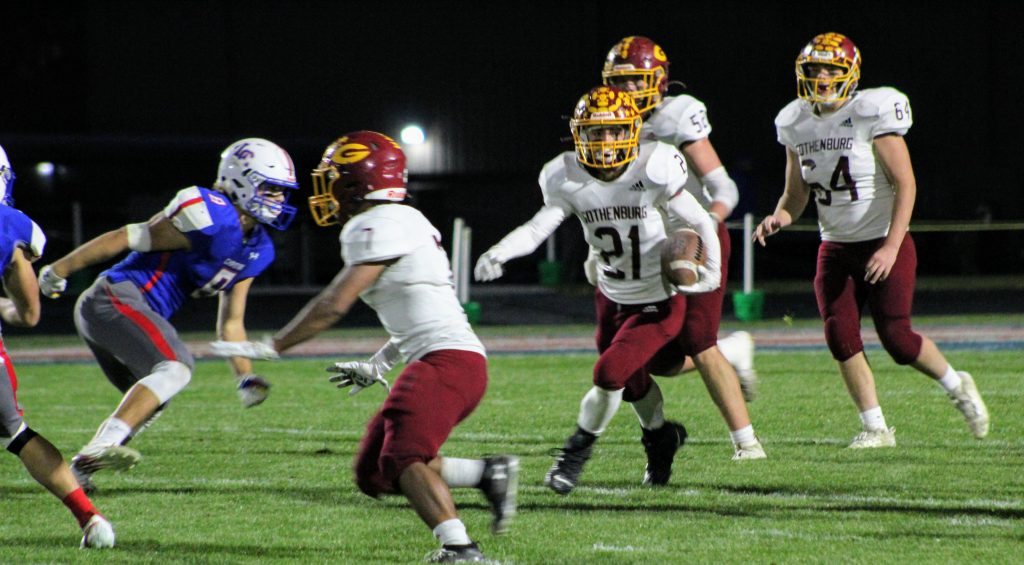 LINCOLN – The improbable 2020 season of the Gothenburg Swedes had to come to an end sometime. In a battle of teams with many similarities the Swedes succumbed to the sixth-seeded Lincoln Christian Crusaders in overtime on Friday night in the first round of the C1 playoffs, 27-24.

With only two returning starters the season began bleak. With a 1-3 record and an offense that struggled, the prospects for any sort of success, not to even mention the playoffs, seemed a long shot.

However, the Swedes found a way. With their backs to the wall, they changed their offense, picked up their defense and went on a six game winning streak. They won their district and garnered the eleven-seed in the playoffs.

Lincoln Christian similarly, seemed to be a dark horse coming into the season after going 0-9 and 1-8 over the last two campaigns. However, the seasoned Crusaders learned from the struggles and went 7-1 on the regular season.

Two teams running double-wing offenses and sporting aggressive defenses faced off on the immaculate turf at the Lincoln Christian Campus.

The Swedes scored first after a Crusader fumble, when Wes Geiken found Carson Rhodes on a 9 yards slant pass. Lincoln Christian answered on the next play from scrimmage on a 73 year run by Gunner Dworak. After a Gothenburg punt, Dworak found pay-dirt again on a 49 yard run that made in 14-7. With two minutes to go before halftime, Geiken ran around end for a game-time touchdown.

With :20 left to go in the third quarter, Ian Paul got his first of two touchdowns on the night, to take a 21-14 lead into the final stanza. A three-yard touchdown run by Owen Geiken tied the game with 2:41 left and the teams settled for overtime.

The Crusaders won the toss and gave the ball to Gothenburg. The Swedes go a 26 yard field go from Bronson Long, to take a 24-21 lead, but it was short-lived, as Paul scored his second touchdown from one yard out to win the game 27-24.

The loss dropped Gothenburg to 6-4 on the season. Lincoln Christian goes to 8-1 and will travel to St. Paul who beat Cozad 48-0.

Owen Geiken finished with 60 yards rushing to lead the Swedes.