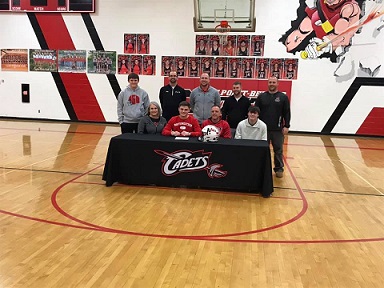 West Point-Beemer Football Standout Zach Vander Griend is headed to Northwestern College next year to play Football for the Red Raiders. Vander Griend helped lead the Cadets to 3 playoff appearances in 4 years, including this past fall where West Point-Beemer lost to eventual State Champion Pierce in the first round. He says the team’s mentality led to their success.

Vander Griend also helped lead the Cadets to the State Quarterfinals in 2017 and the playoffs in 2018.

He shares his favorite High School Memory, which happens to be the Football Game against Wayne in 2017.

That play was a halfback pass caught by his brother Ben, giving the Cadets the 32-28 victory.

Vander Griend says he also had an offer from Dordt.

Vander Griend, who also played Basketball and participates in Track for the Cadets, explains why he chose Football in College.

Vander Griend is expected to play outside linebacker for the Red Raiders and major in Exercise Science.

He is the son of Harlyn and Terri Vander Griend.

Click here to listen to Interview with Vander Griend