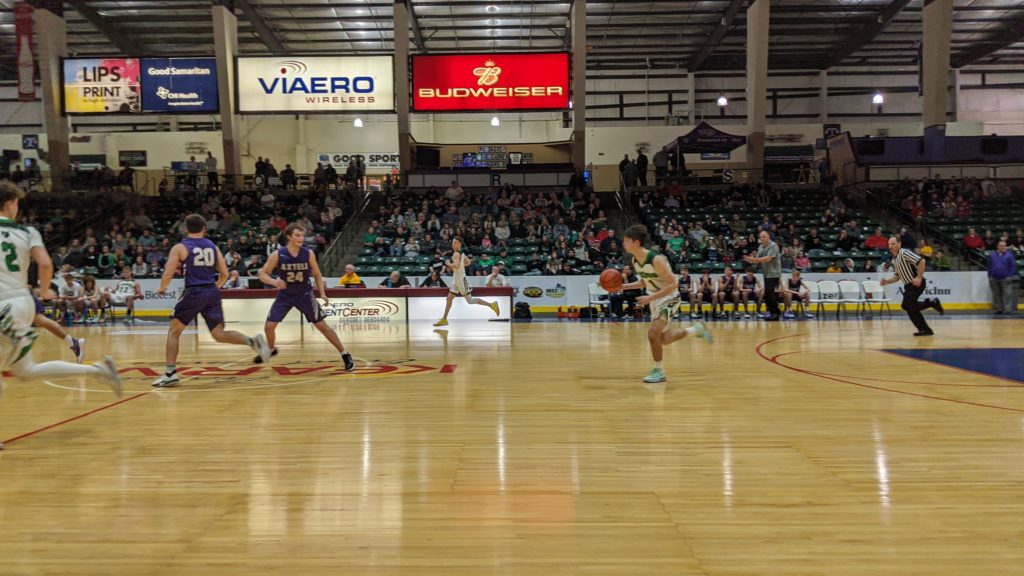 KEARNEY – Entering the boys semi-finals at the Fort Kearney Conference two teams were expected to be there and two may be considered surprises. Pleasanton was the top seed at 16-1, Loomis was the No. 2 seed at 17-0. While newcomer, Ansley-Litchfield was the fifth seed, knocking off the fourth seed Amherst. Axtell was a six seed in the FKC, but knocked off third seeded Elm Creek in overtime on Tuesday night.  On Friday night, the slipper fit Cinderella as Ansley–Litchfield knocked off Pleasanton 40-37 and Axtell beat Loomis 75-57.

The Ansley-Litchfield Spartan’s game plan was to slow the game down and shutter the inside game of the 16-1 Pleasanton Bulldogs. The high scoring Bulldogs were on a 15 game winning streak, the Spartans though, took over the pace of the game from early on. Pleasanton missed some early point-blank shots and then Ansley-Litchfield clamped down the defense, they led 7-6 after the first quarter, 15-13 at halftime, extended their lead to 8 points going into the fourth quarter. The Bulldogs then went on a run and for the first time took a lead at 36-35. However, the Spartan’s were not deterred and knocked down free throws to win 40-37. Tycen Bailey led the way for the Spartans with 14 points, Jeff Cunningham had 8 points, including some of those key free throws down the stretch. The Bulldogs were led by Kessler Dixon who finished with 16.

Ansley-Litchfield improves to 14-4 on the season and advances to the FKC Championship. Pleasanton falls to 16-2 on the year.

The second game of the night was a departure from the first. While the first game was a defensive, deliberative game, the second was fast paced and testy. It was close most of the way. Axtell though led throughout. They jumped out to a 24-23 lead after one. Both teams settled down in the second quarter, but the Wildcats still clung to the lead, now 34-32.

The second half success for the Wildcats had more to do with defensive than offensive as they shut down the interior game for Loomis. Joshua Marcy, who averages 14 points for the Wolves was held to 7 before fouling out in the fourth quarter. Axtell  lead by six points going into the final stanza, where they outscored Loomis 20-10.

Tyler Danburg is was outstanding not only with his defense against Marcy, but also by scoring 27 points. He was joined by Brennan Runge who scored 18 points, Calvin Johnson had 11 and Jacob Wehrer had 10 points. Loomis was led by Shay Swanson who scored 21 and Nolan Benjamin who had 10 points.

Loomis suffers its first loss, falling to 17-1 and Axtell improves to 14-5 and heads to the FKC Championship.