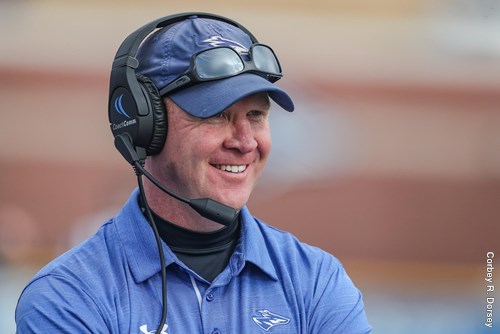 Nebraska-Kearney head football coach Josh Lynn announced today the names of four mid-year transfers who are on campus and will go through winter and spring workouts with the Lopers.

Fox previously was at FCS-member Idaho State and Southwestern (Calif.) College. He ranked second on the SC Jaguars in tackles during the 2019 season with 53. The total included 10 tackles for loss while he also registered four pass breakups and two interceptions for 65 yards. Subsequently, Fox (6-2, 210 lbs.) was named first-team all-league.

The Bonita Vista High graduate spent two years in Pocatello, Idaho, with the Bengals. After redshirting in 2016 he recorded 25 tackles, a fumble recovery and a blocked kick over 11 games in 2017.

Nofoa (6-0, 195 lbs.) spent the 2018 and 2019 seasons at Santa Monica College in Southern California. He had 28 catches for 376 yards and six touchdowns for the Corsairs as a sophomore. The Desert Pines High graduate also brought back 19 kicks for 524 yards and has been at running back during his prep and JUCO years.

A wide receiver for the Iowa Western Reivers in 2019, Peterson (6-1, 170 lbs.) prepped at Harry S. Truman High just outside of Philadelphia. He was part of a 10-2 squad in 2018 and helped the program earn its first-ever state playoff win. Peterson was both a receiver and corner for the Tigers and earned first-team SOL National Conference All-League honors at each spot as a senior.

Maessner (6-0, 190 lbs.), who’ll also run track for the Lopers, signed with FCS-member Princeton but never attended the Ivy League school due to the COVID pandemic. The Tigers had their 2020 fall season canceled and Maessner took online classes during the fall semester.

For the KHS Bearcats he was the 2019 Class A 100- and 200-meter state champion. That speed helped him run for a school-record 1,264 yards and 12 TD’s in the fall of 2019. Also the ‘Cats career rushing leader, Maessner had 1,549 all-purpose yards as a senior, bringing back two kickoffs for scores. Finally, he was a two-time Class A all-state selection and the 2019 Kearney Hub Territory Football Player of the Year.

UNK, coming off a 7-5 bowl season in 2019 and a 2-0 mark in the fall of 2020, is scheduled to begin spring workouts on March 15 (Monday). National Letter of Intent Signing Day for NCAA Division II schools is next Wednesday, February 3rd. With the Loper roster currently just a over 100 players a class of less than 20 is expected.