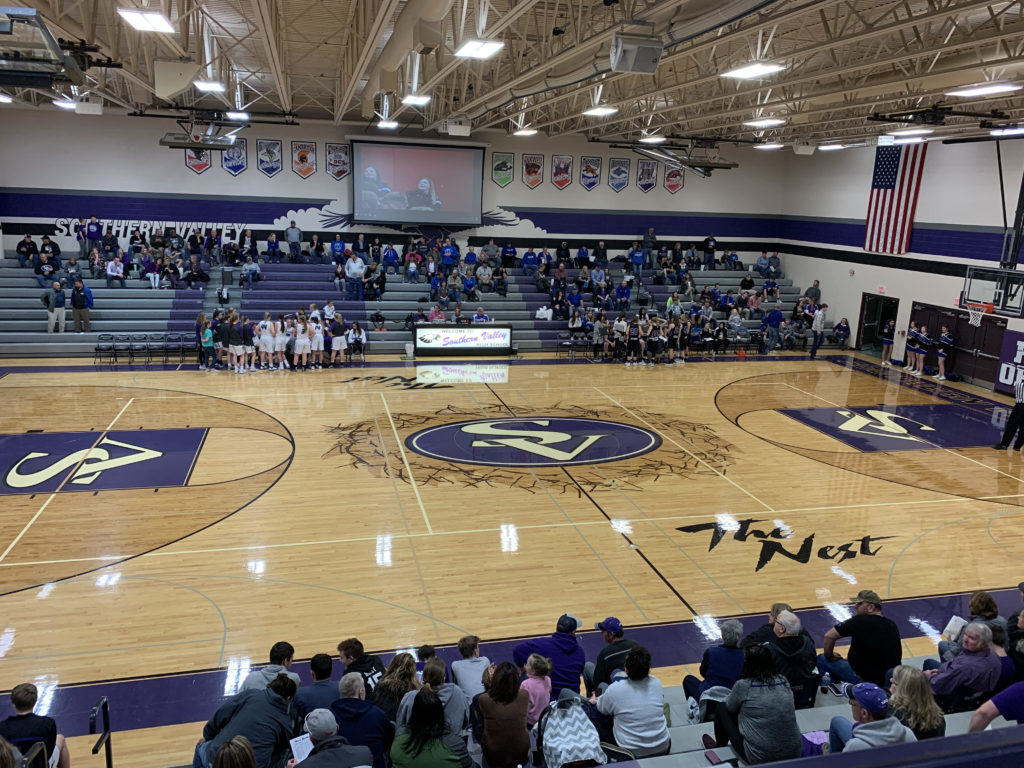 The Southern Valley Eagles walked into their home gym on Thursday night and came away with a win in each contest of the double-header against Arapahoe.

In the first contest at Southern Valley High School, the Lady Eagles powered through Arapahoe in the opening frame to ease into a 12-5 lead. Mandy Schoen led the scoring in the first quarter with 5 points for Southern Valley.

Into the second quarter, Lauryn Samuelson (12 points) took charge creating extra opportunities on the offensive boards as well as snuffing out many passes from Arapahoe inside. Arapahoe did start hot early in the quarter, with Terri Hilker (7 points) striking a three pointer.

From that point forward it was all Eagles, as Grace Hogeland (12) was impressive playing aggressively and quickly to take advantage of fast-break opportunities and creating several turnovers.

As Arapahoe entered the second half looking to cut into the 25-12 deficit, Brianna Quinn (2) smothered Hilker defensively, not allowing any second half points from the leading scorer for the Lady Warriors.

After mass substitutions from both sides, Southern Valley ran the rest of the game clock away to cruise to a 43-21 victory. Southern Valley saw contributions from Samuelson (12), Hogeland (12), Schoen (5), Janessa Kring (5), Krista Best (5), Kara Kreijdl (1), and Kynlee Marquez getting time back from injury adding 2.

In the second game of the double-header, much of the same story lines remained the same from the first contest.

Southern Valley exploded right out of the gate, led by Carter Bose who had 10 points in the opening quarter. Bose exposed the Arapahoe defensive zone throughout the contest, ending the contest with 21 points.

After the opening quarter, the Eagles continued to pace themselves into halftime loading another 14 points, ending the first half with 37. Brody Yant (11) added 9 in the second quarter, including hitting a deep, buzzer-beating three pointer to end the half. Arapahoe saw their scorers add 14, but trailed 37-19.

Southern Valley exploded into the third quarter, scoring on consecutive possessions off of multiple Warrior turnovers. The Eagles saw Clayton Berry (15) add 7 in the third quarter alone, as well as Bose adding 9 points in the quarter. Arapahoe never found a solid offensive footing, only adding 5 points.

With a running clock starting into the mid-part of the final quarter, Southern Valley put in their substitutions and ran away with a 70-28 victory at home.

Both squads look forward to the RPAC Tournament next.