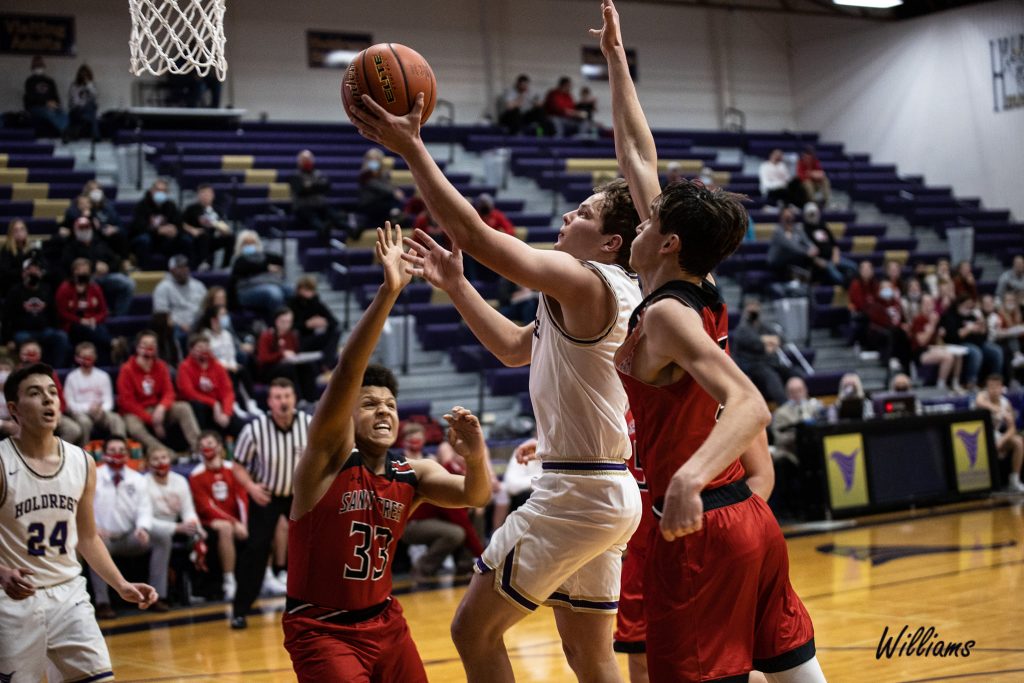 HOLDREGE – Sandy Creek and Holdrege traded blows all night long, but the Cougars escaped on the road earning a gritty 76-70 victory despite Holdrege’s Dashton Edgren dropping 27 points. Click here to listen to the broadcast.

Both teams came into Holdrege High School’s gym looking for their first win on the season, as the Dusters came in at 0-3 with losses from Adams Central, Kearney Catholic, and Lexington. Sandy Creek had numerous issues getting their season started, from COVID issues holding players out and a postponed contest with David City only allowing one game under their belts before heading into this Tuesday night tilt.

Edgren continued his big first half, hitting a three pointer in the second quarter and getting some help from Kaden Broeker as the junior connected on his first three pointer on the season. Unlike the first quarter, four other Dusters contributed to the scoring as Holdrege added 17 points, but allowed Sandy Creek to add 14, 10 coming from Bilftoft in the quarter. Both teams were locked up at 28 heading into halftime, as Edgren had 21 by himself.

The second half saw both teams trade leads after big momentum plays. As one team would hit a shot and take a lead, the other would come back down and connect from their own. Edgren had the scoring started with an opening quarter three pointer, and connected on another later in the third. Other Dusters would get involved as well; Adam Shearer hit two triples, Hudson Reed floated in two jumpers, and Broeker added 4 points in the quarter. Sandy Creek battled throughout the quarter and changed their game plan to an inside battle as junior Josh Shaw put up 9 points inside. The Cougars also got a relief off the bench from Drake Lally, as he added 6 points. Sandy Creek edged Holdrege in the third, 24-20, as the Cougars held the third quarter advantage 52-48.

The fourth quarter saw Holdrege try to fight their way back into the contest but always remained a shot away, as Edgren was held scoreless but Broeker stepped up with three triples, Shearer had two three pointers, and sophomore Jackson Hinrichs guided some passes inside as well as added three points. The Duster defense could not slow down Shaw, who continued to battle for another 9 points. After holding Biltoft to only three points in the third, the junior added another eight points. After senior point guard Jason Brockman collected his fifth foul ending his evening, Lally stepped up hitting a three pointer and finding three more points.

The Dusters continued to hit shots, trading back with Sandy Creek, but late fouls and a miss down 73-70 ended Holdrege’s chances in the waning moments as free throws extended Sandy Creek’s lead to six. The Cougars would escape with a 76-70 victory on the road.

Sandy Creek improves to 1-1 and saw two big nights from Biltoft and Shaw, as they added 29 and 20 points respectively. Other contributions added were from Lally with 13 points, Hayden Shuck connected with 7 points, Brockman tallied 6 points, and Sam VonSpreckelson added one point. The Cougars will return home facing Wilber-Clatonia on Friday followed by Amherst on Saturday.

Holdrege continues to search for their first win falling to 0-4. Edgren finished with 27 points, while Broeker added 16, Shearer contributed 12, Reed tallied 10 points, Hinrichs finished with 3 points, and Jaxson Karn and Carlos Nino de Rivera both finished with 1 point each. The Dusters head on the road to Gothenburg on Friday, and return to home on Saturday against McCook.