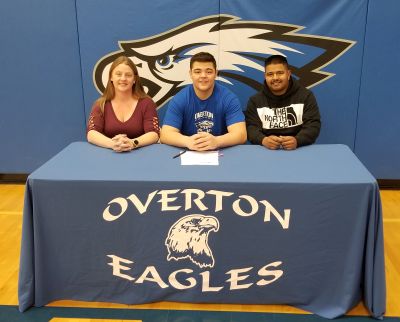 Overton-Kien Martin of Overton signed his letter of intent Wednesday to play football at Chadron State next season. Martin was an all state performer for the Eagles during his high school career. He helped the Eagles  advance to the Class D2 State Semifinals. Martin also was the Class D State Heavyweight wrestling champion last season. He says being being familiar with Chadron State helped him decide on the Eagles.

Martin was also selected to play in the Shrine Bowl and the  Nebraska Eight Man All Star games  this summer but will have to pass on those opportunities as he will have surgery on his knee when the wrestling season in completed. Martin says he plans to play defensive tackle for Chadron State.