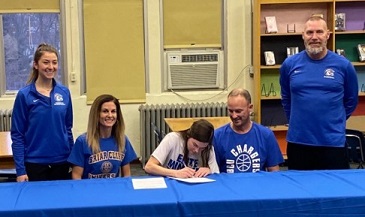 Oakland-Craig Girls Basketball Standout Kennedy Benne has signed with Briar Cliff. Benne says she knew early on that she wanted to be a Charger.

Benne says she plans to major in Biology at Briar Cliff.

She is the daughter of Dale and Stephanie Benne.

The Knights are currently 22-0 and ranked No. 1 in Class C-2. Benne says making a run at a State Championship would be a huge deal.

The Knights battle West Point-Beemer in West Point tonight at 6:00 p.m. in action that can be heard on 107.9 the Bull.