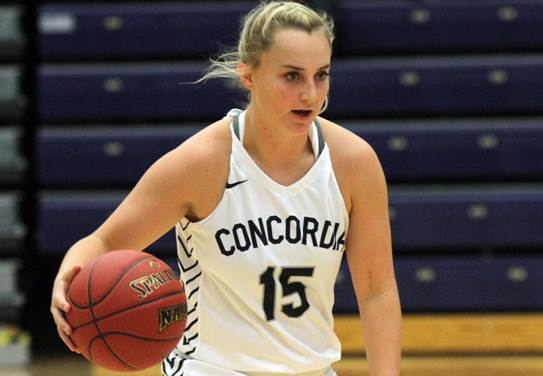 LAKELAND, Fla. – Twenty-four hours after suffering its first loss of the season, the top-ranked Concordia University women’s basketball team looked more like itself. The Bulldogs made 7-of-11 shots from 3-point range in the opening quarter on Saturday (Dec. 21) and rode that dominant first 10 minutes to a 97-55 win over William Carey University (Miss.). The victory came on day two of the Southeastern University Christmas Invitational in Lakeland, Fla.

Fourteenth-year head coach Drew Olson’s squad will return to Nebraska with a 12-1 overall record. No. 2 Southeastern put the one blemish on Concordia’s record in Friday’s action in Lakeland.

“We did play a little bit better (than Friday),” Olson said. “As for the things we are trying to work on defensively, we were a little bit better at them. It was not the same type of opponent. We know that we still have a lot of things to improve upon. We’re excited to get to work when we get back from the break.”

The Crusaders (4-7) did not push the Bulldogs for long – at all. Concordia raced out to a 17-2 advantage and kept William Carey distantly in the rearview mirror. Less than five minutes into the contest, sophomore Mackenzie Koepke had already drilled two treys. Soon after, freshman Taylor Farrell took it from there.

A Millard West High School product, just like All-American teammate Philly Lammers, Farrell is basically in range from beyond the arc when stepping past half court. Farrell drained 4-of-6 3-point field goals on her way to a career high 18 points. As a team, Concordia cooled off from long range after the first quarter, but it still managed to net 13 treys.

“She’s just playing really confidently,” Olson said of Farrell. “She’s giving us something that we’ve kind of been missing the last few games. We need to find more shooters.”

Concordia held William Carey to 17.1 percent (6-for-35) shooting in the first half and 28.8 percent (19-for-66) shooting for the game. In defeat, the Crusaders got a starring performance off the bench from Rebekah Engle, who paced her side with 18 points on 7-for-13 shooting. William Carey kept its turnovers in check with 24.