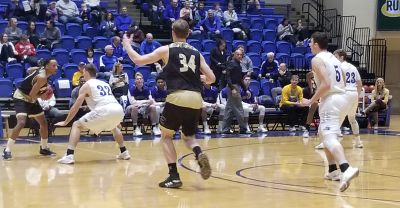 Kearney, Neb. – The Nebraska-Kearney men’s basketball team went 10 of 14 from the three point line to have a 60-point half en route to an 85-58 win over Emporia State Saturday evening at the Health & Sports Center.

After setting a new record for margin of victory in an MIAA game Thursday vs. Washburn (28), UNK almost did again today thanks to a final 20 minutes in which it made 23 of 35 shots (66%) including 10 bombs. Those threes came from five different players with Utah junior Jake Walker (six) and Iowa senior Kyle Juhl (five) combining for 11 of the 15 overall makes. That finally tally is just two shy of tying the school record.

“It helps when you make rhythm shots … it simplifies the game. But defense really kind of set the tone for everything and the three pointers were kind of the cherry on top,” UNK head coach Kevin Lofton said.

It was a defensive struggle in the first half as they teams combined for 48 points on 20 made shots. UNK led 4-0 at the 16:09 mark but fell behind 19-13. A late flurry helped erase that deficit with a three from Alliance junior reserve forward Austin Luger making it 25-21 with 2:41 left. E-State scored a minute later and the Lopers went into the locker room up two.

“I was very proud of the defensive effort they gave for the entire game. First half they got us down a little bit and we were struggling offensively in spots. We bared down on the defensive end and they got us into transition and kept us in it until we could find some offense,” Lofton said.

UNK made back-to-back-to-back threes early in the second half to open up a 36-28 lead. Walker hit two of the bombs with Juhl nailing the other. After scoring on its next two possessions, the Lopers got another triple from Walker and one from Juhl soon after to make it 46-32. That was all she wrote as E-State didn’t get close than 13 the rest of the way.

“Coming into the year we wanted better ball movement, better spacing. What we’re doing now (offensively) involves a lot of ball movement, lot of player movement and solid screens. And It’s worked out so far,” Lofton said. “When you got a Trey Lansman, a Connor Beranek, a Ethan Brozek … when you have those kind of guys it does make sense to iso things. With this group team work seems to be our best weapon.”

One of four starters in double figures, Walker scored 18 thanks to 6 of 12 three point shooting with Juhl going 5 of 7 from behind the arc to tally 15. He also had a team-best five steals and handed out three assists; UNK had 27 dimes on 33 field goals.

Next Kansas senior forward Morgan Soucie had nine points in both halves and a team-high seven assists with Bellevue forward AJ Jackson at 14 points, six boards, three dimes and a steal. Finally Luger had seven points, three boards and a block off the bench.

While Emporia shot 50% (23 of 46) from the field, they committed 22 turnovers which led to UNK taking 17 more shots. The Hornets also gave up 11 offensive rebounds that led to 18 Loper second chance points. E-State was led by reserves Gage McGuire (16 points) and Zac Owens (11 points).

UNK heads to defending national champion Northwest Missouri State (16-1, 6-1) on Thursday night. The Bearcats, on an eight-game win streak, are 116-6 since the start of the 2016-17 season.

It was a defensive battle until the fourth quarter and a game in which UNK led for nearly 36 minutes. Both teams erupted over the final 10 minutes, tallying 33 points apiece. Both squads went 7 of 9 (5 of 6 threes) from the field to start the fourth but Kearney held the lead thanks to being plus eight on the scoreboard in the first quarter and plus six in the third. E-State did take the second quarter, 14-5.

“The first time we were not ready for the way they play. They turned us over 31 times as we really struggled with their pressure. This time I thought we were much more composed,” said Loper head coach Carrie Eighmey. “We knew what to expect and our strategy was a little bit better to. Overall we still had 15 turnovers but that’s half of what we had on the road.”

Ahead five to start the fourth, UNK moved ahead 54-47 on a three by South Dakota sophomore Klaire Kirsch. It was just a four-point Loper lead with 4:03 left before Kirsch hit her third and final triple of the day. However, E-State got a fast break trey from starter Morgan Laudan with 1:57 remaining to make it a 66-63 ball game.

Holt followed with her fifth and final bucket of the day and then the Hornets misfired on a three. UNK, a 63% free throw shooting coming in, promptly hit six straight freebies over the next 50 seconds to make it 74-69 and secure the 13th all-time win vs. the perennial Division II power.

“We didn’t hit a ton of shots but we hit enough to attack a zone. You’re going to have to hit a couple of outside shots against a zone and we were able to do that,” Eighmey said.

Four starters and a reserve were in double figures for Kearney with Holt and Colorado point guard Haley Simental tallying 16 apiece. Simental was 4 of 8 from downtown with Holt 5 of 9 from the field and 6 of 10 at the line. She was a beat on the glass (11) with seven of her boards coming on the offensive end. As a team Kearney was plus 22 which led to 16 second chance points.

“Defensively we wanted to get stops so we could play live ball instead of dead ball. We did a really good job defensively in the first half. We gave up the lead late but if you hold someone to 25 points in a half you feel decent,” Eighmey said.

Emporia saw redshirt freshman guard Tre’Zure Jobe tally 16 of her game-high 23 points in the first half with starter Mollie Mounsey having all of her 11 points after the break. 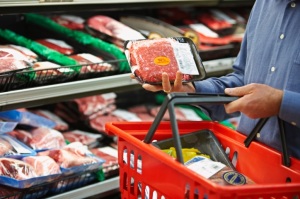