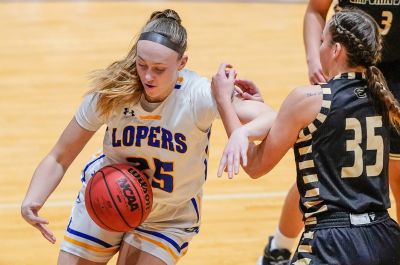 Kearney, Neb. – The Nebraska-Kearney women’s basketball team closed on an 11-3 run to slip past Emporia State, 59-54, Thursday evening at the Health & Sports Center. This was the season-opener for both teams with the MIAA being the first NCAA Division I or Division II conference to start regular season action for the 2020-21 season. Emporia and UNK were picked first and second, respectively, in the MIAA Preseason Coaches’ poll. Last year the two teams split the regular season series, each winning at home, with the Hornets downing the Lopers in the MIAA Tournament quarterfinals. That helped E-State earn a bid to the NCAA Tournament while UNK ended at 26-6. Things got off to a good start for Kearney as they never trailed in the first half and led 23-13 early in the second quarter. However, the Hornets hung around and used a big third quarter to swing the momentum. Star guard Tre’Zure Jobe made all four shots she attempted in the third to help her team move ahead 42-36. “It’s the first game and we’re playing one of the best teams in the league. It’s one those games you have to come out and be ready to go. I think our experience helps us in that,” UNK head coach Carrie Eighmey said. “The good is that we found a way to win the game. We were able to play 11 tonight … we thought we had some good depth and we do.” Things were knotted at 44 heading into the fourth with UNK finding itself down 51-48 at the seven-minute mark after a three by senior Kali Martin.

A layup by Iowa sophomore reserve post Madison Dreckman quickly followed and then neither team scored for over three minutes. Finally, the seal broke as the Lopers turned a defensive rebound into a fast break with Kansas junior reserve post Elisa Backes converting a three-point play with 3:18 to play. UNK never trailed again with Backes adding another bucket and redshirt sophomore reserve post Shiloh McCool sinking one as well. It was her first game back after missing all of 2019-20 due to injury. “One of the things that was surprising tonight was Emporia is usually a zone team. They played a lot of man tonight … they didn’t have all their size available. They usually play up tempo, full court, press everywhere, play zone. So we were ready for that but had to kind of pivot in the middle of the game and kind of go against our game plan,” Eighmey said. UNK was out rebounded by two but shot 70% (14 of 20) at the line, got 30 bench points and tallied 17 points off 16 turnovers.

A balanced attack was led by Colorado point guard Haley Simental (15) and McCool (14) with South Dakota junior wing Klaire Kirsch adding 10 defensive rebounds. “A lot of their players were playing a lot of minutes. Down the stretch our ability to keep subbing, keep bringing in fresh bodies and throw extra bodies at Tre’Zure Jobe. who is a phenomenal player, was really key for us,” Eighmey said. Emporia suited up just nine players with three fouling out. Jobe made 7 of 19 shots (1 of 7 threes) to score a game-high 22 with Martin (11) and senior post Daley Handy (10) combining for 21 points. UNK is slated to host Washburn Saturday afternoon. The Ichabods had its road game at Fort Hays State tonight postponed

Kearney, Neb. – The Emporia State Hornets sunk eight first half three pointers and used a mini-run in the second half to hold off short-handed Nebraska-Kearney, 69-57, Thursday night at the Health & Sports Center. This was the season-opener for both teams with the MIAA being the first NCAA Division I or Division II conference to start regular season action for the 2020-21 season. UNK, down three starters who are slated to be back for a Dec. 5 game with Fort Hays State, won the second half by a 33-26 score and finished with nine made triples. Nine Lopers played with four being newcomers. “Winning the second half was huge for us because that’s what we said we wanted to do coming out of the locker room at half time,” UNK head coach Kevin Lofton said. “The first half didn’t go the way we would’ve liked it to go. With a young group out there, including a couple of international kids getting their feet wet, we probably played like a nervous team.” Emporia made eight of its first 13 three pointers and then missed its final nine. Leading nearly the entire way, the Hornets got double digit efforts from guards Jumah’Ri Turner (13) and Austin Downing (12) with six different players sinking a trey. Scoring 12 of the game’s first 14 points, Emporia moved ahead 30-13 on a three by Downing with 7:33 left in the first half. The deficit was 43-24 at the break but UNK started the second half on a 14-2 run that featured two threes by Texas senior guard RJ Pair. “RJ stepped up in the second half and really provided some leadership and scoring,” Lofton said. “The bad news is we lost three guys we really count on but the good news is some guys got baptized by fire. They all found some confidence.”

E-State responded to that second half punch with a 6-0 spurt that made it 51-38 with 13:05 to play. UNK got the deficit down to nine a couple of more times but the Hornets always had a response, ending the night shooting 52% from the field and having a plus seven rebounding margin. Getting 29 bench points, Emporia also got five assists and four boards from Downing with Turner at two boards and two steals. Reserve post Mayuom Buom was efficient, going 4 of 5 from the field to end up with eight points and four boards in 17 minutes.

Bellevue redshirt sophomore Cedric Johnson had a team-highs in points (16) and assists (five) to lead the Lopers. The lefty was 6 of 12 from the field in playing 33 minutes. This marks his fifth career double digit effort. Next, Pair hit three treys to tally 11 with Utah junior forward Darian Nebeker going all 40 minutes and supplying seven points, seven rebounds and three assists. Finally, Kansas freshman T.J. Fritz came off the bench and was 3 of 6 from downtown to score nine in 16 minutes of work. “Darian attacked the basket in the second half and Cedric was able to setup up and make a few plays for us,” Lofton said. “I look for Cedric to play even better on Saturday. We’re excited moving forward … we just have to get through this stretch and get our guys back.” UNK is scheduled to play Washburn on Saturday evening. The Ichabods won at Fort Hays State tonight, 80-78.