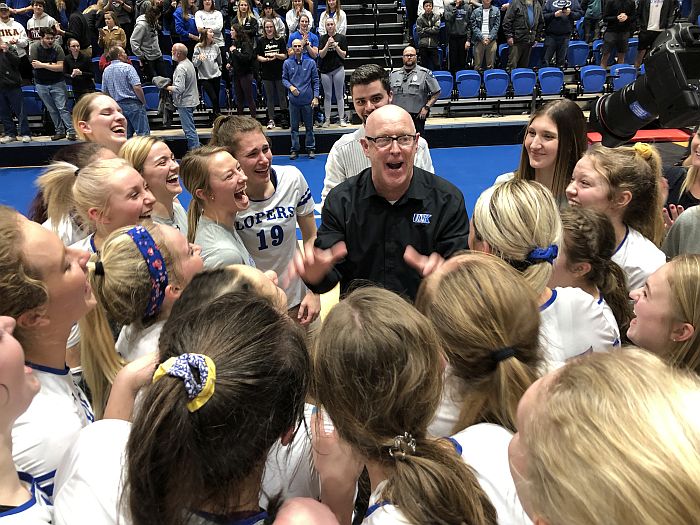 Kearney, Neb. – The second-ranked Nebraska-Kearney volleyball team aims to reach the national semifinals for the first time in 14 years when it takes on the Gannon Golden Knights Thursday at the Elite Eight in Denver, Colo.

The UNK/GU winner advances to the second Friday semifinal match (8:30 p.m. Central) and will face the Rockhurst/Carson-Newman winner.

The second-seeded Lopers (36-0) had a busy first day in Colorado, visiting the Girls Athletic Leadership School in Downtown Denver as part of the NCAA Division II Community Engagement program. All eight teams visited area schools on Wednesday, either before or after practice. The day wrapped up with the all eight teams attending the American Volleyball Coaches Association (AVCA) Awards banquet. Each team was asked to speak for three minutes, talking about their journey to Denver, with the AVCA All-Americans in attendance being introduced.

The Lopers will forgo a 25 minute morning walkthrough and head over to the Auraria Event Center around noon to watch the first match of the day, third-seeded Rockhurst vs. sixth-seeded Carson-Newman (Tenn).

UNK, 3-5 all-time in the Elite Eight, is a solid 5-1 in NCAA matches played in the Mile High city. That includes a 2-0 mark in 2003 when the Lopers beat St. Edward’s (Texas) and Rockhurst at Metro State and earned a trip to the Elite Eight in San Bernardino, Calif.