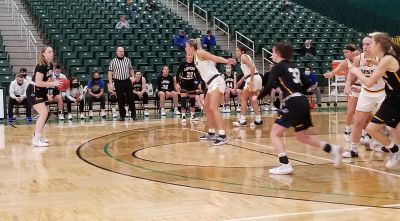 Kearney, Neb. – Junior forward Elisa Backes had another big effort as No. 4 Nebraska-Kearney pulled away from Missouri Southern State, 65-57,Saturday afternoon in Joplin.

“Absolutely we’re getting people’s best shots. We talked about that during film,” UNK assistant coach Devin Eighmey said on the KRVN Radiopostgame show. “We had to make adjustments today with a different lineup. We used lineups that we thought matched up well and then changed some things at half time.”

Missouri Southern came in shooting 39% from the field but was on throughout the first half. They hit exactly half their shots (12 of 24; 2 of 4 threes) to lead by as many as eight. The Lions got contributions from a variety of players with senior wing Carley Turnbull scoring 12 in the first half. She came in averaging just over 14 points a night.

Backes (Salina, Kan.), making her first career after 71 games as a reserve, went on a 10-0 personal run to erase a 25-17 Southern advantage. She hit two triples and two jumpers in a two-minute span to give UNK its first big push of the afternoon. Backes finished with a team-best 21 points, tying a career-high.

“We used a lineup in the second half that gave us a little bit more ball handling and athleticism. Credit to our team … we came out punching in the third quarter,” Eighmey said. “We got great contributions from people that stayed ready. That’s being part of a good team; your number could get called at any time.”

While MSSU ended the quarter on a 5-0 run, UNK led most of the second half. A three-point play from junior forward Maegan Holt (Council Bluffs, Ia.) broke a 40 all tie late in the third and then UNK got huge threes from guards Trinity Law (Brandon, S.D.) and Kelsey Sanger (Crofton) in the fourth. Law’s made it 48-44 with Sanger hitting hers from the opposite wing to push the Loper lead to eight at 54-46.

Junior reserve forward Madison Dreckman (Le Mars, Ia.) also provided a spark over the final 10 minutes to the tune of two buckets, two free throws, four rebounds and a presence in the lane. After that hot start MSSU was just 10 of 31 (32%) from the field in the second half and tallied only two points over a key six-minute stretch in the fourth. UNK also ended plus nine on the glass, shooting a solid 45% (22 of 49) and getting 26 bench points.

Backes reached her point total by going 6 of 11 (3 of 5 threes) from the field and 6 of 8 at the line. She also had three blocks, two rebounds, an assist and steal over 32 minutes. Backes had 21 points in the 2020 MIAA Tournament win against Missouri Western State.

“Defensively we buckled down in the second half,” Eighmey said. “Madison did a great job off the bench. We’re happy for Elisa for all the work she’s put in. She has a high ceiling and is starting to figure it out. She’s a tough matchup.”

Turnbull hit a couple of late buckets to finish with a team-best 18 points. She also had seven rebounds and three steals. Six-three post Madi Stokes was a factor early and tallied 14 points, eight boards, two blocks and two assists.

UNK hosts Fort Hays State (9-2) Tuesday in a makeup of an originally scheduled December game. That contests tips at 5:30 p.m.

Kearney, Neb. – The Missouri Southern State Lions scored the game’s first nine points and never looked back in an 85-57 win over Nebraska-Kearney Saturday evening in Joplin.

The Lions (6-5), a 2020 NCAA Tournament team, down the Lopers (5-8) for a fourth straight time. During this stretch Southern is averaging 87.5 points per game against UNK.

“Everybody kept asking me what’s going on with them. They’ve been such a powerhouse the last few years, making the NCAA Tournament and finishing in the top two or three in the league,” UNK head coachKevin Lofton said on the KRVN radio post game show. “They weren’t shooting it at the level they are used to, and we hoped we could come in here and maybe that would continue. But they shot it extremely well … defensively we left a lot to be desired.”

Missouri Southern hit its first three triples as part of a 6 for 7 shooting start to lead 17-6 by the 14:16 mark. UNK never got on track offensively, shooting an even 29 percent (20 of 69) which included a 7 of 30 effort from behind the arc. That marks the third time this year the Lopers have hoisted at least 30 threes; they are 0-3 in such games.

“I told the team at halftime we’ve come too far to have a defensive effort like that in the first half,” Lofton said. “They made some plays and they started fast for a second straight game. They were up 23-6 against Fort Hays on Thursday.”

“Cam (6-9, 240 pounds) is one of the best players in the league. He’s a load … there were times we sent two players at him and we just bounced off him,” Lofton said. “Their point guard (Scott) has some size, and we did a poor job of staying in front of him. Their role players also stepped up.”

UNK was led by Utah senior guard Jake Walker (16) and Bellevue sophomore wing Cedric Johnson (11). The combined for 27 points by going a combined 9 of 20 from the field. Finally, Utah junior reserve forwardDarrian Nebeker had a team-best eight rebounds, six points, and four assists.

“We did not play well on either side. Offensively we didn’t have much flow … we couldn’t get our normal actions executed,” Lofton said. “I can’t count the times we got to the basket and they smashed it against the back board. They certainly have some talent.”

The Lopers have only one game next week, a road date at Fort Hays State on Saturday.