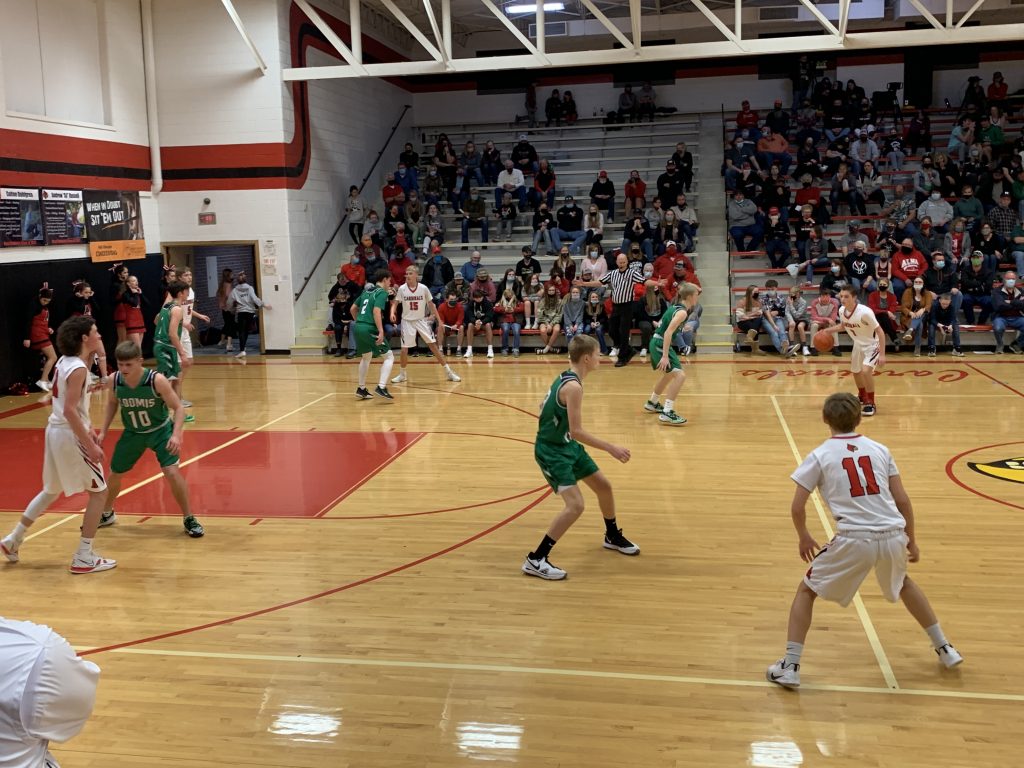 ALMA – The Loomis Wolves started on 21-1 run to start the contest on the road in Alma and earned some milestones along the way as junior Quinn Johnson earned his 1,000th career point while adding more in a 85-47 victory over Alma. Click here to listen to the broadcast.

Things got started quickly, as Loomis had their eyes set on a fast start and they rattled home three pointers from Johnson and Aiden Lovitt to start the contest. Alma was able to knock down a free throw, but the Cardinals would not score again until Johnson went on a tear, adding 14 points in the first quarter alone while surpassing his 1000th career point. The scoring continued outside of Johnson for Loomis, as Shay Swanson knocked down free throws and Cale Nelson added 8 points in the first, 6 of which came from back-to-back three pointers. Tanney Heckenlively for Alma would connect on three pointers and a mid-range jumper having 8 points in the first quarter, but Loomis led 31-13 at the end of the first.

The same story continued into the second as Johnson added another 10 points in the quarter, Lovitt hit three triples and Loomis shut down scoring outside of Heckenlively to lead 57-13 as the Wolves went on a 26-13 run.

The third quarter saw Loomis lead go from 57 to 66 quickly, getting to the 40 point advantage while running the rest of the clock while getting some reserves time in the contest as Loomis ran away with the victory 85-47 on the road as the final buzzer sounded.

Loomis improves to 12-2 on the year and will face Hi-Line at home on Friday night. The Wolves had contributions from Johnson with 30 points, 18 added by Lovitt, Swanson and Nelson each had 11 points, 6 points came from Jackson Lauby in his first varsity action on the year coming off injury, 4 points dropped by Christian Blincow, Aiden Perry hit a three pointer, and Grayson Trumble had 2 points.

Alma falls to 2-11 on the year as the Cardinals had contributions from Heckenlively with 18 points, 7 points tallied by Ryan Kermmoade as he had two three pointers in the fourth quarter, 5 points added by Drew Neubauer and Jakin Neal, 3 points tallied by Gage Thulin, and 2 points contributed by AJ Russell.