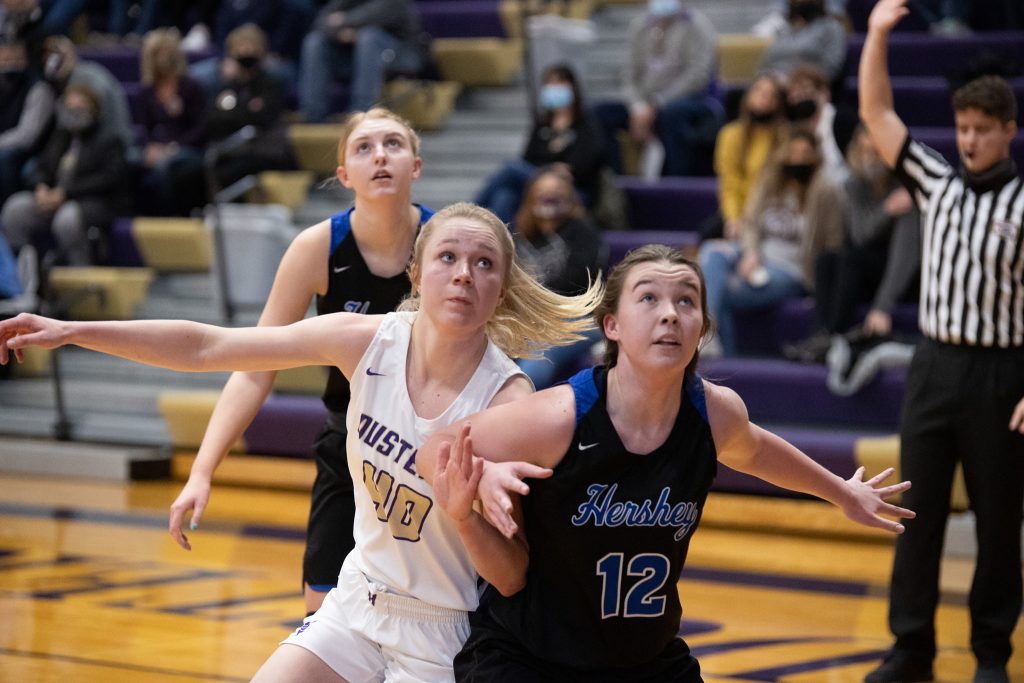 HOLDREGE – The Holdrege Lady Dusters faced another stiff test against the Hershey Panthers at home, trailing into the second half until late heroics and sound fundamentals closed out the contest as Holdrege earned their 7th win on the season winning 51-42. Click here to listen to the broadcast.

The contest started well for Holdrege, as the Dusters began the scoring with quick shots from Alexis Bliven scoring a layup and adding a three pointer, while Mallory Pfeifer was fouled heading to the basket as she added two free throws. Hershey hit a three pointer from Shayda Vaughn, and added a few free throws as their key offensive weapon Tahlia Steinbeck added two in the quarter, followed by a single from Kinley Folchert. Holdrege added their own scores from Ortgiesen and another from Bliven as the Dusters led 11-6 at the end of the first.

In the second quarter neither team found a consistent rhythm offensively as both teams piled up fouls and had to find tough shots. Steinbeck continued her success at the free throw line hitting four points from the charity stripe. Folchert hit a much needed three pointer as her shot brought the game back into one possession. Holdrege was unable to score anything except at the free throw line adding 8 points as Ortgiesen tallied 5 of them. Hershey started to find other scorers as well, Dayonna Roberts added 4 points and Michalee Brownawell tallied a point. With the game tied at 18, Holdrege was able to add a free throw from Alexis Bliven entering halftime up 19-18.

The third quarter started hot for the Dusters, as Mallory Pfeifer began finding her groove inside hitting jumpers for 4 points and adding a free throw as well. Ortgiesen added another inside look while Hershey answered with top scoring from Steinbeck adding 6 in the quarter. Vaughn and Roberts added lay-ins while Roberts also added another three points from the free-throw line. Holdrege had opportunities to pull away but Hershey continued to answer each offensive score with their own. Both teams were locked in at 31 at the end of the third quarter.

Hershey began to pull away at the beginning of the fourth quarter, as Holdrege fell behind after Steinbeck hit a three pointer adding in some lay-ins as well. The Dusters continued to stay in the contest, adding in free throws and remaining within one possession. Vaughn added another jumper inside and had Hershey up 40-38 with less than a few minutes to go in the contest. Holdrege then had Ortgiesen set up in the far corner as she hit a three pointer that gave the Dusters the lead they never gave up. After a defensive stop, Bliven hit a three pointer from the same spot, as Holdrege pulled away hitting free throws to end the contest with a 51-42 victory.

Holdrege improve to 7-4 on the season. The Dusters saw contributions from Ortgiesen with 15 points, Bliven added 14 points, Pfeifer had 10 points, Avery Hurlbert tallied 5 points, Megan Belgum contributed 3 points, while Brooklyn Berney and Taylor Wiser each had two points. The Dusters face off against Aurora on the road on Tuesday night, as that game can be heard in Holdrege on KUVR.

Hershey falls to 8-6 on the year as the Panthers saw contributions from Steinbeck with 19 points, Roberts added 9 points, Vaughn had 8 points, Folchert had 4 points, and Emma Hall and Bronawell tallied 1 point each.