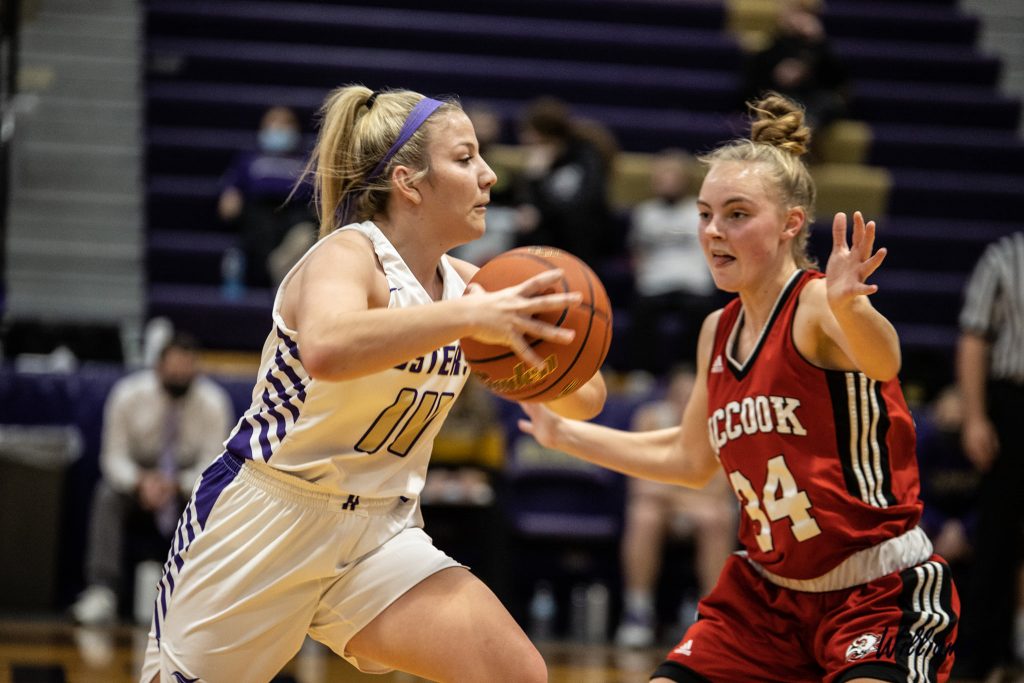 CREDIT - Jim Williams Photography
HOLDREGE – The Lady Dusters played their fourth game in 8 days on Saturday, as the McCook Lady Bison traveled to Holdrege. The Lady Dusters got off to a fast start but weren’t able to continue their offensive rhythm, falling to McCook 34-26. Click here to listen to the broadcast. Holdrege was coming off of three straight wins over Lexington, Sandy Creek, and a tough 24-21 win against Gothenburg on Friday night. They continued their momentum in the first quarter, starting off hot with a 7-1 run. McKenna Ortgiesen got the scoring started, and Alexis Bliven continued her offensive prowess with four points in the first. McCook would hit a free throw to start the game, but rallied back with back-to-back three pointers from Peyton Doucet. The Lady Bison would only trail by 1 ending the quarter, as Holdrege led 9-8. McCook then flew by the Lady Dusters in the second, with a stout defensive performance and a solid scoring output adding 12 to end the half. Much of those second quarter points came from the bench, as Kennedy Walter added 6 and Emma Dutton scored 4. Holdrege continued to chip away when faced with the deficit, as Alexis Bliven fought for steals and free throws scoring all four points from the charity stripe. Megan Belgum added two and Brooklyn Berney added a free throw as well. Holdrege trailed going into halftime trailing 20-16. The second half started as a defensive battle, as McCook added 4 and Holdrege was held without a score in the quarter. In the fourth, another triple from Doucet started a faster offensive performance for both sides, as McCook and Holdrege scored 10 in the final quarter. After being held scoreless in the third, Bliven added 7 points from the free throw line and Taylor Wiser hit a three pointer with less than two minutes to go, but it wasn’t enough as Holdrege fell 34-26 at home.   Holdrege falls to 3-3 on the year as they prepare for the Lincoln Lutheran Holiday Tournament. The Lady Dusters saw contributions from Bliven adding 15 points, 3 points from Berney, Wiser, and Ortgiesen each, and Megan Belgum scored 2. McCook improves to 3-4 on the year. The Bison will prepare for the Cabela’s Holiday tournament in Sidney. McCook had contributions from Doucet scoring 11 points, Walter adding 7 points, Shawna Wilkinson tallied 6 points, Dutton and Tori Honn added 4 points each, and Tiara Matson scored 2 points.
© 2021 Nebraska Rural Radio Association. All rights reserved. Republishing, rebroadcasting, rewriting, redistributing prohibited. Copyright Information
Share: