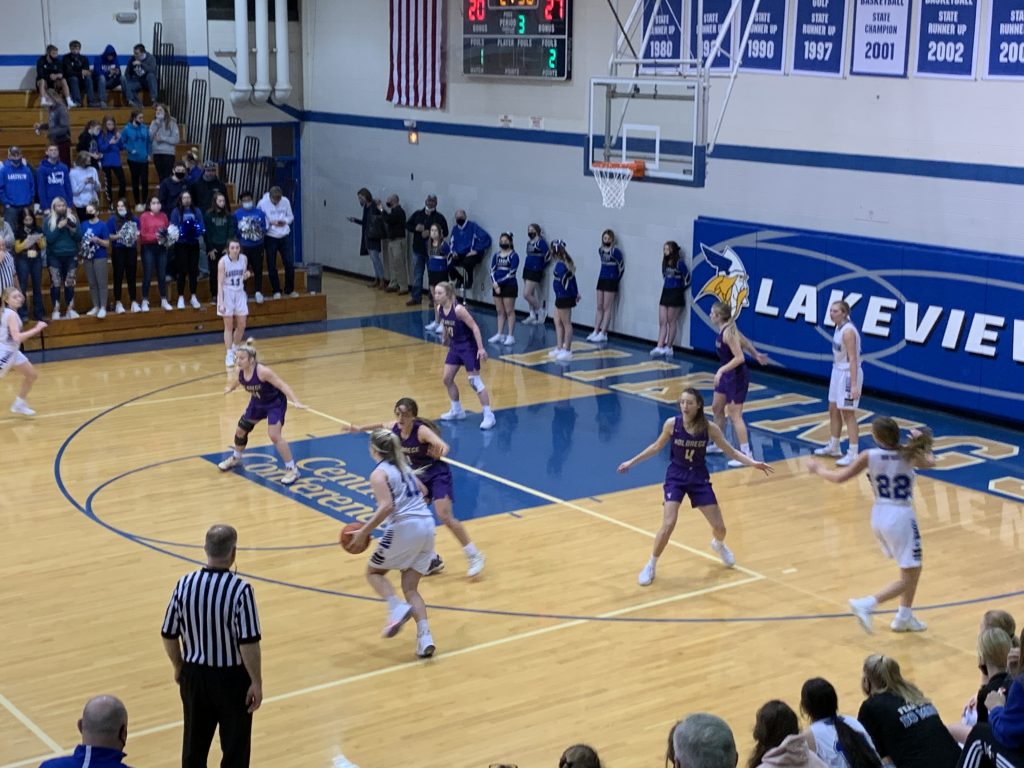 COLUMBUS – The Lady Dusters earned a trip to the semifinal round of the Central 10 Conference Tournament on Wednesday night with a 46-37 win at Columbus Lakeview over the Vikings. Click here to listen to the broadcast.

Both teams showed off their scoring at the opening moments off the contest as Holdrege saw 4 different Dusters contribute while Lakeview equaled the same number. The difference was a quick and aggressive Duster defense able to make opportunities for passes inside to Mallory Pfeifer and Alexis Bliven, both having 4 points in the first quarter. Holdrege led 12-9 at the end of the first.

Bliven got things rolling to start the second quarter, draining a three pointer and adding another later in the quarter. The Dusters trademark defense locked in before halftime, only allowing 5 points in the second quarter with 3 of the 5 coming from the free throw line. Holdrege however paced themselves well offensively as Megan Belgum and McKenna Ortgiesen both battled inside for buckets and Pfeifer added another two from the free throw line, leading to the Dusters 24-14 lead into the locker room.

Roles reversed into the third quarter as Holdrege had trouble against the moving defense of Lakeview. The Dusters only tallied 4 points and gave up 10; 6 from Katee Korte and 4 added by Maddie Vogt. Holdrege had a nice play from Taylor Wiser to get a three point play as she drove inside, but even amid their struggles at the offensive side Holdrege still led 28-24 into the final quarter.

The Dusters outscored Lakeview 18-15 in the final quarter as both teams sprinted to the finish. Holdrege kept their lead by knocking down free throws – connecting on 8 of 11 as a team. Wiser had two three pointers which sealed the game away for Holdrege as they burned through the rest of the game clock before Lakeview could mount a comeback. The Dusters allowed some end of contest free throws, but earned their 46-37 victory on the road to advance in the tournament.

The #5 seeded Holdrege Dusters improve to 9-6 on the season and face the winner of #1 Crete and #8 Lexington on Friday in the Aurora Sports Complex. The Dusters had contributions from Bliven with 13 points, Wiser had 12 points, Pfeifer tallied 8 points, Belgum had 6 points,  Brooklyn Berney hit free throws for 4 points, Ortgiesen added 2 points, and Avery Hurlbert tallied 1 point.

The #4 Columbus Lakeview Vikings will await their matchup with either #3 Adams Central or #6 Northwest on Saturday. The Vikings had contributions from Korte with 10 points, 8 points added by Reese Janssen, 7 points tallied by Vogt, 3 points added by Grace Hatcher and Josie Bentz, 2 points added by Cassie Rathbone, and 1 point tallied by Haley Frenzen.