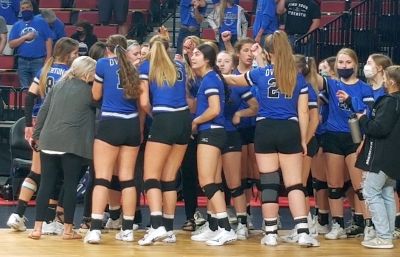 Lincoln-Overton’s run in the Class C2 State volleyball tournament ended on Friday as the Eagles lost to Norfolk Catholic in four sets, 25-18, 17-25, 19-25, 21-25. The Eagles were aiming for their first trip ever to the state finals. Things started well as Haley Fleischman and Rachel Ecklund combined for 14 kills in the first set. Overton however struggled to pass in the second and third sets and Norfolk Catholic gained the advantage.

In the fourth set, it was back and fourth and tied at 17 before the Knights made a late run. Fleischman had 22 kills, while Ecklund had 18. Norfolk Catholic is now 24-8 and will play for a state title for the first time in school history. Overton who is 27-3 will play in the third place game at around 11am on Saturday against Clarkson-Leigh. That match can be heard on KAMI Country 92.7, 100.1 FM and krvn.com