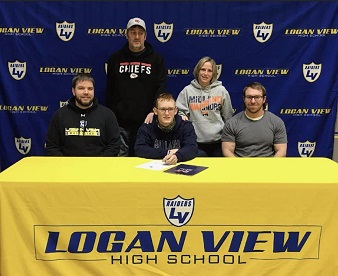 Logan View/Scribner-Snyder Football Standout Jadin Beckwith has signed with Midland. Beckwith says he was the team’s kicker, and helped lead the Raiders to the playoffs this past fall.

Beckwith says the longest field goal he’s kicked was a 45-yarder in warmups against Arlington.

Beckwith says Head Coach Dustin Sealey was very instrumental in his development as a kicker.

Beckwith also took part in Wrestling his first 3 years of High School, is currently a member of the Boys Golf Team, and has played Baseball for the Hooper-Scribner Legion Team.

Beckwith tells KTIC Sports his Academic and Family ties drew him to Midland.

Beckwith says he will kick and play linebacker for the Warriors, in addition to Double Majoring in Criminal Justice and Ag Business.

He is the son of Ed and Kelly Beckwith.