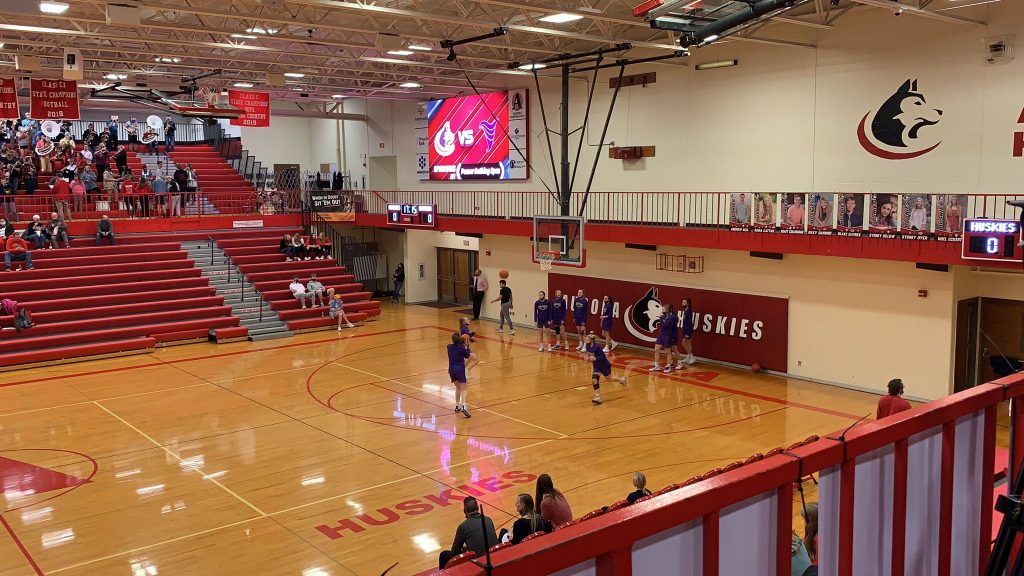 AURORA – Cassidy Knust for Aurora sunk a free-throw to take the lead by one with 8.6 seconds left to play on Tuesday night, upsetting the Holdrege Lady Dusters in a 36-35 victory at the Aurora Sports Complex. Click here to listen to the broadcast.

Both teams came into the contest with something to prove: Holdrege looked to continue their three game winning streak while Aurora wanted to show improvement after playing within 10 points of one of the top teams in Elkhorn North just a few days prior. Both mindsets showed in the opening moments of the contest after Aurora won the opening tip, as the Lady Huskies immediately attacked the basket but Holdrege was able to get a defensive stop.

The Dusters maintained their defensive prowess but faced a stiff test against Aurora’s rotating defenders as points were at a minimum in the opening quarter. Mallory Pfeifer started the scoring with an inside look from the post as Holdrege took the early lead. Cassidy Knust, the leading scorer for Aurora on the season, took the lead into the hands of the Huskies as she hit a 3 pointer only moments after. Pfeifer was able to add another score inside, while Delaney Nachtigal and Kasey Schuster added two points each to lead Aurora 7-4 after a defensive first quarter.

In the second quarter, scoring came quickly for Holdrege as the Dusters outpaced Aurora 14-10 in the following eight minutes. After the first foul by either team was whistled on Holdrege in the opening minute, Aurora’s Rylee Olsen knocked down a free throw followed by freshman Avery Hurlbert getting fouled inside as she knocked down back-to-back free throws. After a free throw from Kassidy Hudson for Aurora, Alexis Bliven set up in the far corner for a three pointer that brought the game within one. Hurlbert added a three pointer on the following possession, while Aurora was able to respond with more quick scores as Raina Cattau hit a triple, Knust hit a floated on the baseline, and Olsen added three more in the quarter. Holdrege tied the game at 17 as Taylor Wiser and McKenna Ortgiesen hit jumpers, and Hurlbert gave Holdrege the halftime lead 18-17 after a free throw.

In the second half, Bliven and Knust battled on both ends of the floor – Bliven hitting another shot from three and adding two free throws while Knust added four points as well. Pfeifer added 5 points in the quarter after long passes from Wiser came to break a full court pressure. The Dusters were outscored in the third quarter by two, 13-11, as Aurora had more role players to add points coming from Kylie Larson who stepped up off the bench and immediately hit a three pointer while Lexi Jones added two and Olsen dropped four points. Holdrege trailed 30-29 entering the final quarter.

A defensive showdown started with the final eight minutes, as Holdrege clamped down to not allow any inside looks or drives to the basket come easy. After Knust added another contested three pointer and Holdrege locked up with Aurora at 35 after hitting free throws, it came down to the final possession as Aurora sent Knust to the free throw line with 8.6 seconds remaining. The senior connected on the first shot, missed the second, and the ensuing Holdrege possession ended on a long pass off the hands of a Duster into the waiting arms of Nachtigal in the paint as time expired.

Aurora improves to 5-8 on the season and returns to home on Thursday against Kearney Catholic. The Lady Huskies saw contributions from Knust with 13 points, Olsen had 8 points,, 3 points were tallied by Hudson, Larson, and Cattau, and 2 points were added by Jones and Schuster.

Holdrege falls to 7-5 on the season as they prepare for their rivalry matchup at home against Minden Friday night. The Dusters saw contributions from Bliven with 11 points, 9 points coming from Mallory Pfeifer, 6 points tallied by Hurlbert, 5 points added by Ortgiesen, 3 points contributed by Wiser, and 1 point coming from Megan Belgum.