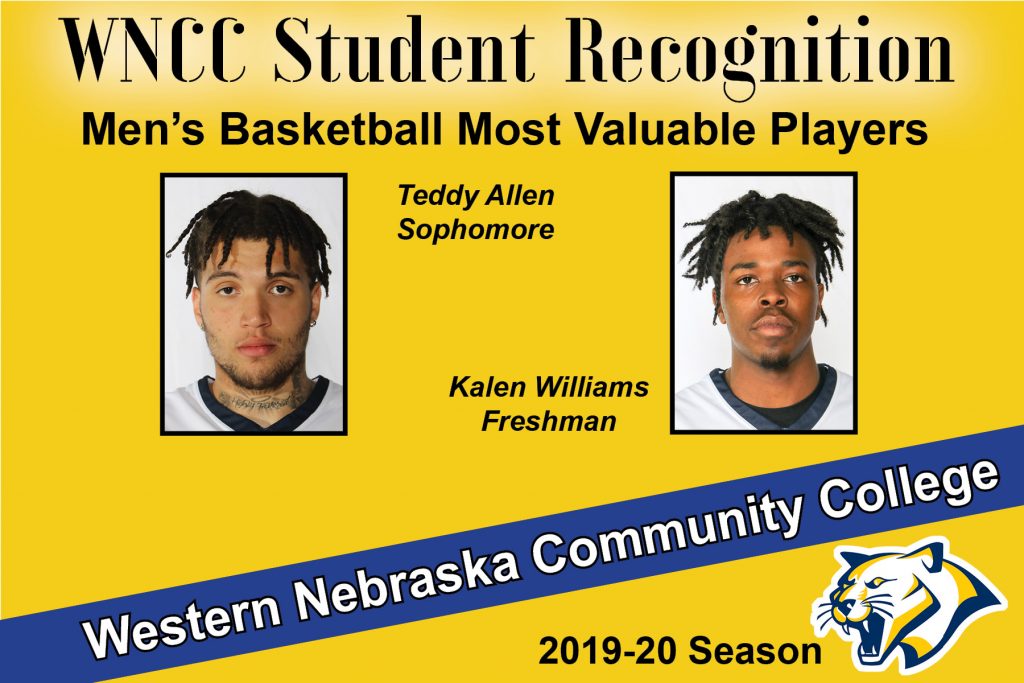 Yuliyana Valcheva was the only basketball player to win multi awards, earning three honors. Valcheva, a sophomore, was named the top female athletic GPA winner. She was also named an Unsung Hero Award winner and then was named women’s basketball MVP along with her teammate TK Morehouse.

All four MVP winners will be heading to the NCAA Division I level next year. Valcheva signed to play at the University of Texas San Antonio while Morehouse is headed to Florida Gulf Coast University.

The men’s MVP winners spent just one year at WNCC Allen is headed to be a Cornhusker after signing with the University of Nebraska. Williams, a freshman, verbally committed to play at New Mexico State University over the weekend and as a qualifier will have three years to play.

Valcheva said it is an honor to be picked for the Unsung and MVP awards after a season where the 6-foot-1 wing averaged 12 points a contest. The other Cougar athletes that were named Unsung Hero Award winners included volleyball player Gabriela Canavati, softball player Sam Davis, soccer player Caroline Vieira, and baseball player Chandler Young.

“It is really exciting to be selected for the athletic unsung hero award along with these great athletes from the other sports,” Valcheva said. “This award means a lot for me and it also motivates me for my future experience in my new journey. I’m really thankful, happy and proud for it! This recognition award means a lot for me and I also congratulate the other athletes, who deserve it, too!”

As for MVP, she couldn’t be happier to be sharing with Morehouse.

“During these two years, I put a lot of effort in the name of my team, I tried to help my teammates on and off the court as much as I can,” Valcheva said. “For this award, I’m most thankful for my coach Chad Gibney, who helped me to improve a lot and become a better player in this two-year journey at WNCC. I’m also thankful to my teammates, who supported me and helped me all of the time. I worked really hard and left my heart and all of my energy on the court on each practice and game. I had two fantastic seasons with the shirt of Western Nebraska and I’m really thankful for this award. It means a lot for me and it is honor to be named for a most valuable player on my team along with my great teammate TK.” 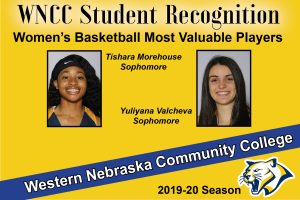 “It was really hard for me to say goodbye to my coaches, teammates, friends, and dorm family in March. I knew I had only two more months left and I knew that it will be really hard to leave the Cougar Palace, but the virus break really speeded everything up and made it even harder for me,” Valcheva said. “I made the decision to leave in one day and I was probably not prepared. I wanted so much to go to the national tournament in my sophomore year, to be on the graduation ceremony with all of my friends and with my coaches and instructors. This is probably something that all of us wanted to happen, but the situation didn’t allow it. It is still hard to be away from everybody due to this crisis, but I keep in touch and wait everything to be over soon, so we could meet again soon.”

Morehouse had a consistent two years. Her freshman year, Morehouse started just two games averaging 14.8 points a game. This past season, Morehouse tore it up averaging 21 points a game, while burying 79 treys. Morehouse finished her 2-year career with 1,118 points, which is second in WNCC history behind Merle Wiehl, who set the record in January 2019.

On the men’s side, both Williams and Allen were the Cougar men’s leading scorers along with Kenny Strawbridge. Williams, who came to WNCC from Georgia, averaged 13.5 points a contest and buried 35 treys his freshman season. Williams started 20 of 31 games for the Cougars while shooting 58.1 percent from the field.

Allen was the all-around performer for the Cougars with a couple games where he finished with a triple-double. Allen led the nation in scoring at 31.4 points a game. He holds the season and career scoring average record and is just one of two players to score 700 and 800 points in a season. Allen scored 879 points in his only year with the Cougars.

Allen buried 78 3-pointers a year ago and holds the school record with 17 30-point games, breaking the record of 16 set by Eric Gore from the 89-90 season. Allen also holds the season made free throw record with 229 made charity tosses.

Allen had four games where he scored 40 or more points, including a season-high 45-point win against Casper College in the quarterfinals of the Region IX tournament. In that win, Allen buried 16 of 18 from the charity stripe in the win. Allen scored in double figures in 27 of the 28 games he played.

All four MVPs had a strong season at WNCC. Valcheva said she had an amazing sophomore year at WNCC, both academically and athletically.

“I learned a lot, I improved in both skills, and also grew as a person through these two years,” she said. “I put all of my energy and efforts in the name of the WNCC program and these awards are true honors for me, because after all of the great memories and experience, they will remind me of my unforgettable journey in Scottsbluff, Nebraska. They will remind me of what I achieved in school and in basketball. They will remind me of the amazing people I met, of the knowledge and skills I gained, and of the people, who worked with me and helped me to win those recognitions. I’m happy and proud for my years as a Cougar.”

Valcheva added that she will continue to come back during her breaks at UTSA while she continues to get her education in the United States.

“I am planning to come back in Scottsbluff through my stay at UTSA. Every time we have a break, I would come to Scottsbluff to see my teammates, my friends, my coaches, and my dorm family,” she said. “It will be really exciting for me to go back as much as I can through my last two years in America and spend time with everybody.

“These awards put a good end to my journey here in Scottsbluff, made me happy, but for me the experience I gained and the people I met are more important and I’m thankful for everything that happened to me.”