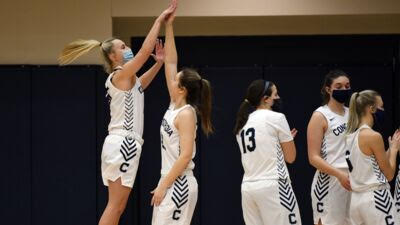 SEWARD, Neb. – Everyone had their opportunities to make an impact on Thursday (Jan. 28) as the 25th-ranked Concordia University Women’s Basketball team pulverized visiting College of Saint Mary, 111-52. The Bulldogs drained 15 treys and scored at least 23 points in each quarter in a strong performance inside Friedrich Arena. Sophomore Taylor Farrell topped all players with 18 points.

Head Coach Drew Olson’s squad hopes to show it belongs in the NAIA top 25 after reclaiming a national ranking on Wednesday. Concordia (14-7, 13-5 GPAC) currently resides in second place in the GPAC standings.

Said Olson, “I thought we moved the ball well and played unselfish basketball. That allowed for better shots. I think this game was good to get some people confidence.”

In unleashing the press, the Bulldogs flustered the Flames (2-16, 1-14 GPAC) into committing 36 turnovers. On the other end, Concordia found wide open shooters all evening. Four different Bulldogs curled in multiple 3-point field goals: Farrell (4-for-6), Chaise Pfanstiel (3-for-4), Taysha Rushton (3-for-6) and Faith Troshynski (2-for-3). When it wasn’t bombing away from the perimeter, Concordia could drop it down low to Kayla Luebbe, who racked up 16 points and seven rebounds.

Pfanstiel found a groove early on. Before six minutes had even elapsed in the opening quarter, the Millard West High School product had knocked in 11 points while connecting on three triples. The arrival of Pfanstiel for the second semester gives the Bulldogs another weapon.

“The team was really encouraging during warmups,” Pfanstiel said. “I was hitting in warmups and Coach Olson told me before I went out there, ‘Let it fly’ – so I did and it went in … I’m lucky for the opportunity to come in and play and be part of the team.”

College of Saint Mary had also played road games on Sunday and Monday. The Flames are paced by a talented freshman in Honnah Leo, who collected 16 points while going 4-for-6 from 3-point range on Thursday. As a team, CSM shot 33.3 percent from the floor. The Flames did manage to force 18 Concordia turnovers.

The 111 points scored by the Bulldogs equaled the season high they also achieved at Doane back on Nov. 18. The victory on Thursday marked the 399th win in Olson’s coaching career. The only basketball coach in school history to reach 400 wins is Grant Schmidt, who guided the men’s program to 445 victories from 1989 to 2012.

Idle this weekend, the Bulldogs now get set for their final road game of the regular season. They will play at Dordt (12-9, 11-7 GPAC) at 6 p.m. CT next Wednesday (Feb. 3). In this season’s first matchup between the two sides, Concordia won in Seward, 73-62, while being led by the 15 points produced by Rushton. The Defenders began this season ranked eighth in the NAIA.