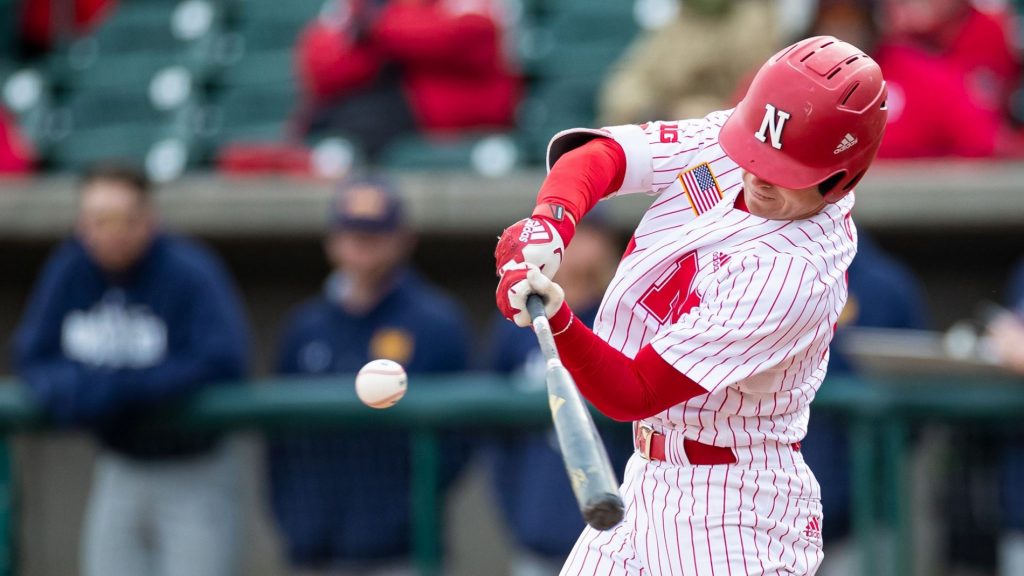 The Huskers (6-4) snapped a three-game losing streak, belting a season-high four homers and reaching double figures in runs for the fourth time in 10 contests.

Chick, who entered Saturday with a .167 average, paced NU’s attack with three of the Huskers’ 13 hits, including a grand slam to highlight a seven-run third and a two-run shot in the sixth after Iowa pulled to within 8-7.

In addition to Chick’s two homers, Jack Steil homered and drove in two RBI, while Max Anderson went 2-for-4 with a homer and two runs scored.

Braxton Bragg (1-1) earned the win with 2.0 innings of three-hit relief. Spencer Schwellenbach, who went 2-for-4 and scored twice, tossed 1.2 innings of shutout ball for his second save. He got NU out of a jam in the eighth after Iowa had runners at second and third with one out.Nebraska, which scored just five runs in its three-game losing streak, struck in the top of third, chased Iowa starter Drew Irvine after 2.1 innings.

The Huskers opened the third with consecutive singles from Joe Acker and Jaxon Hallmark before Schwellenbach reached on an error to load the bases with no outs. Chick put the Huskers on the scoreboard as he deposited Irvine’s 1-0 offering over the fence for his second homer of the season to give the visitors a 4-0 lead. Anderson made it 5-0 one pitch later, belting his third homer of the season over the fence in left. Efry Cervantes coaxed a one-out walk to chase Irvine. Two batters later, Steil capped the outburst with a two-run homer off Hawkeye reliever Ben Beutel to make it 7-0.

Irvine, who pitched into the sixth in the last matchup against Nebraska, took the loss, as he allowed six runs on five hits for the Hawkeyes.

Iowa, which didn’t get a runner into scoring position for the first 3.2 innings, got on the scoreboard in the bottom of the fourth on a solo homer from Zeb Adreon.

Luke Roskam got the run back in the top of the fifth as his RBI single plated Anderson, who opened the frame with a double to right center.

Hroch, who had allowed one run on three hits over the first four frames, ran into trouble in the fifth as the Hawkeyes plated six runs to cut NU’s advantage to 8-7.

Tyler Snep opened the frame with a solo homer before the Hawkeyes continued to battle back. Trenton Wallace reached on a one-out double and scored as Ben Norman’s run-scoring triple. Hroch then hit Matthew Sosa to put runners on the corners, ending the starter’s afternoon. Sayer Diederich uncorked a wild pitch before Peyton Williams’ two-run single made it 8-5. The Hawkeyes proceeded to load the bases on a walk and a hit batter before Austin Martin’s two-run single off Bragg made it 8-7. Iowa eventually loaded the bases before Bragg fanned the next two hitters to get out of trouble.

Nebraska used the long ball to stretch the lead back to three in the top of the sixth. Schwellenbach doubled with two outs before Chick’s second homer of the afternoon, a two-run shot to left, extended the Huskers’ lead to 10-7.

The Hawkeyes made it 10-8 in the seventh as Martin’s sacrifice fly plated Dylan Nedved, who opened the frame with a single and moved to third on Adreon’s single to right.

In the eighth, Iowa got the tying run into scoring position the Huskers get out of a jam. After a one-out single by Norman, Sosa greeted Schwellenbach with a doubled to right center that landed just beyond the outstretched glove of Hallmark to put runners on second and third. Schwellenbach then retired the next two

hitters to escape unscathed and pitched a perfect ninth for the save.

Martin drove in three runs, while Williams added a pair of RBI for the Hawkeyes (4-6).

The series concludes Sunday afternoon at 1 p.m. The game will be carried on the Learfield IMG Husker Sports Network and carried online at BTN+.

Notes
Cam Chick’s grand slam was the first by a Husker since Leighton Banjoff hit one at Arizona State on March 1, 2020…Today marked the first time NU had back-to-back homers since Aaron Palensky and Spencer Schwellenbach hit back-to-back homers against Michigan on May 25,2019…Before his six-RBI outburst today, Chick’s previous best was four RBIs on two occasions, most recently against Iowa on May 24, 2019…Nebraska’s three homers in the fourth was its first 3-homer inning since March 1, 2020…Nebraska has had just one error in its last nine games dating back to March 6…. Schwellenbach’s 1.2 innings of relief was the longest outing of his career.