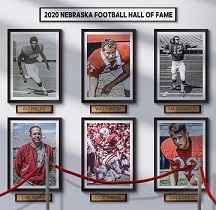 Six standout players and a long-time assistant coach are part of the 2020 Nebraska Football Hall of Fame Class announced on Thursday. The group includes five former Husker players and a Division II All-American.

Three players and one assistant coach from the 1970 national championship team were selected to the 2020 class by acclimation of the Board of Directors of the Nebraska Football Hall of Fame. The 1970 team is celebrating the 50th anniversary of Nebraska’s first national championship.  Inductees from the 1970 team include quarterback Van Brownson, fullback and 1970 team captain Dan Schneiss, offensive tackle Wally Winter and 11-year Cornhusker assistant coach Carl Selmer.  Each of the three players earned honorable-mention All-Big Eight accolades during the 1970 season.

Two other former Husker standouts were voted in as members of the 2020 class. Defensive end Ray Phillips, was an all-conference defensive end for the Huskers in 1976, while I-back Doug DuBose was a two-time All-Big Eight pick in 1984 and 1985.

The final member of the 2020 class is Chris Bober, a standout offensive lineman and Division II All-American for the UNO Mavericks in the late 1990s.

Prior to 2015, players must have been either an All-American or first-team all-conference selection to make the Nebraska Football Hall of Fame ballot. Beginning in 2015, Huskers who earned second-team all-conference honors dating back to the expansion of the Big Eight to the Big 12 (1996) and now the 14-team Big Ten, are eligible. Players are not eligible for the ballot until after a 10-year waiting period from the end of their collegiate careers. Major national award winners earn automatic induction. Active NFL players are not on the ballot.

Van Brownson, Quarterback, 1968-71—A three-year letterwinner at quarterback, Brownson helped guide Nebraska to a pair of national championships in 1970 and 1971. Brownson finished his career with 1,572 passing yards and 12 passing touchdowns. He made three starts for the 1970 team and completed better than 65 percent of his passes. A native of Shenandoah, Iowa, Brownson also directed Nebraska to three wins to close the 1969 season, including a win over Oklahoma and a Sun Bowl victory against Georgia. Brownson was an eighth-round selection by Baltimore in the 1972 NFL Draft.

Dan Schneiss, Fullback, 1968-70—Schneiss was the top all-around fullback in the Big Eight during his time with the Cornhuskers, helping Nebraska feature one of the top offenses in the nation. Voted as the best blocking back in the nation, Schneiss was a team captain on the 1970 team. He ran for 330 yards and four touchdowns as a senior, while catching 18 passes out of the backfield, including a key grab on the game-winning fourth-quarter drive against Oklahoma. A native of West Bend, Wis., he ran for 397 yards and caught 20 passes as a junior in 1969. He was an 11th-round selection by New England in the 1971 NFL Draft.

Wally Winter, Offensive Tackle, 1968-70—A native of Eagle, Neb., Winter teamed with Bob Newton to give Nebraska one of the nation’s top tackle tandems in 1970. Winter was called the Gentle Giant off the field, but was a tenacious competitor on the field. Winter’s blocking helped an offense that averaged better than 230 rushing yards and 420 yards of total offense per game in 1970. Winter passed away in December of 2015.

Ray Phillips, Defensive End, 1975-76—An All-Big Eight defensive end in 1976, Phillips earned honorable-mention All-America accolades as a senior. Phillips made 49 total tackles in 1976, including eight tackles for loss, while he also recovered a fumble, intercepted a pass and blocked a punt. Phillips made 62 tackles in his junior season in 1975, including three tackles for loss and added three pass breakups. A native of Milwaukee, Wis., Phillips was a fifth-round pick by Cincinnati in the 1977 NFL Draft. He played five seasons in the NFL (Bengals, Eagles) and also played two seasons in the USFL.

Doug DuBose, Running Back, 1982-86—One of the nation’s top running backs during his Nebraska career, DuBose was a two-time All-Big Eight pick in 1984 and 1985. DuBose rushed for better than 1,000 yards in both his sophomore and junior seasons, helping the Huskers to the Sugar and Fiesta Bowls, respectively. The Uncasville, Conn., native finished ninth in the NCAA in rushing in 1985, after rushing for 1,040 yards as a sophomore. DuBose’s career was cut short by a knee injury that sidelined him for his senior season in 1986, but he managed 14 career 100-yard rushing games and 2,205 career rushing yards. DuBose played two seasons with the San Francisco 49ers, and was part of a Super Bowl winning team.

Chris Bober, Nebraska-Omaha, Offensive Line, 1996-99—Bober started 45 consecutive games as an offensive lineman at Nebraska-Omaha. Bober earned first-team Division II All-America honors from the American Football Coaches Association, Daktronics/CoSIDA and Football News. He was named the Division II Offensive Lineman of the Year by Gazette Magazine when UNO led Division II with 335.2 rushing yards per game in 1999. He was also a first-team All-American by Daktronics/CoSIDA as a junior. An Omaha native, Bober was a two-time first-team All-North Central Conference selection and the league’s offensive lineman of the year in both 1998 and 1999. He played eight seasons in the National Football League with the Giants and Chiefs, appearing in 91 career games with 37 starts.