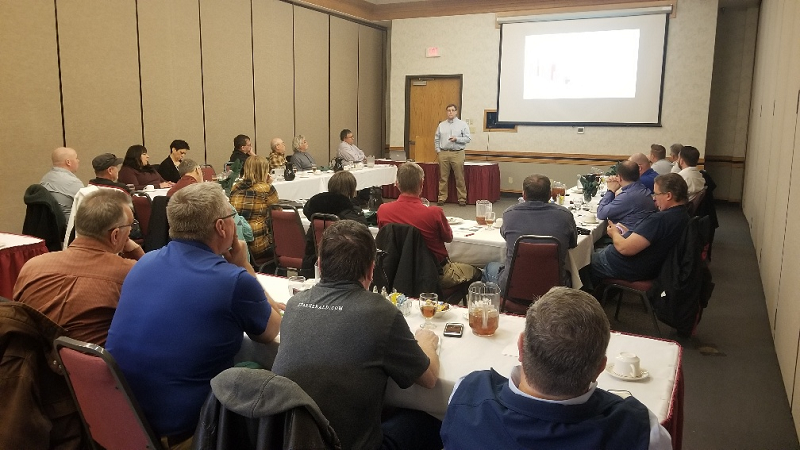 Members of the Western Nebraska Economic Development group met at the Gering Civic Center Thursday to hear how regional landfills have been developed and operated in other parts of the state.

Representatives of the Loup Central Landfill Association and Solid Waste Association of Northwest Nebraska presented how their operations work, gathering and receiving waste from a wide area.

Retired Gordon City Manager Fred Hlava told those in attendance that when it comes to development of a regional facility and how it will operate, there needs to be a lot of common sense. “if we don’t do it with common sense, it’s gonna fail, and be a terrible mess,” said Hlava, speaking of the planning process in the development of a landfill site and transport system for SWANN. “There wasn’t a lot of guidance on how to accomplish this, because it had not been done nationally.”

Travis Evans of TriHydro Corporation also gave the group and update on the process of Gering and Scottsbluff seeking a site for a new, potentially regional landfill.

Evans said having a local facility is important to economic development, citing his work over ten years with the City of Cheyenne as that community was considering a new landfill  site. “They were trying attract new businesses, new industries to Cheyenne, and one of the first questions they were asked is ‘Do you have a landfill?’. And at that time all they could tell them was ‘Well, we have a C&D (construction debris) landfill, and we’re trying to permit a new expansion area,” said Evans. “And they (the businesses) said, ‘Well, if we’re going to move here, you need to get that expansion permit area built, because we’re not going to  transport waste to Colorado.”

During Evans’ presentation, he noted that ideally, a new landfill for Gering and Scottsbluff should be located somewhere inside a 45-mile radius of the two communities.