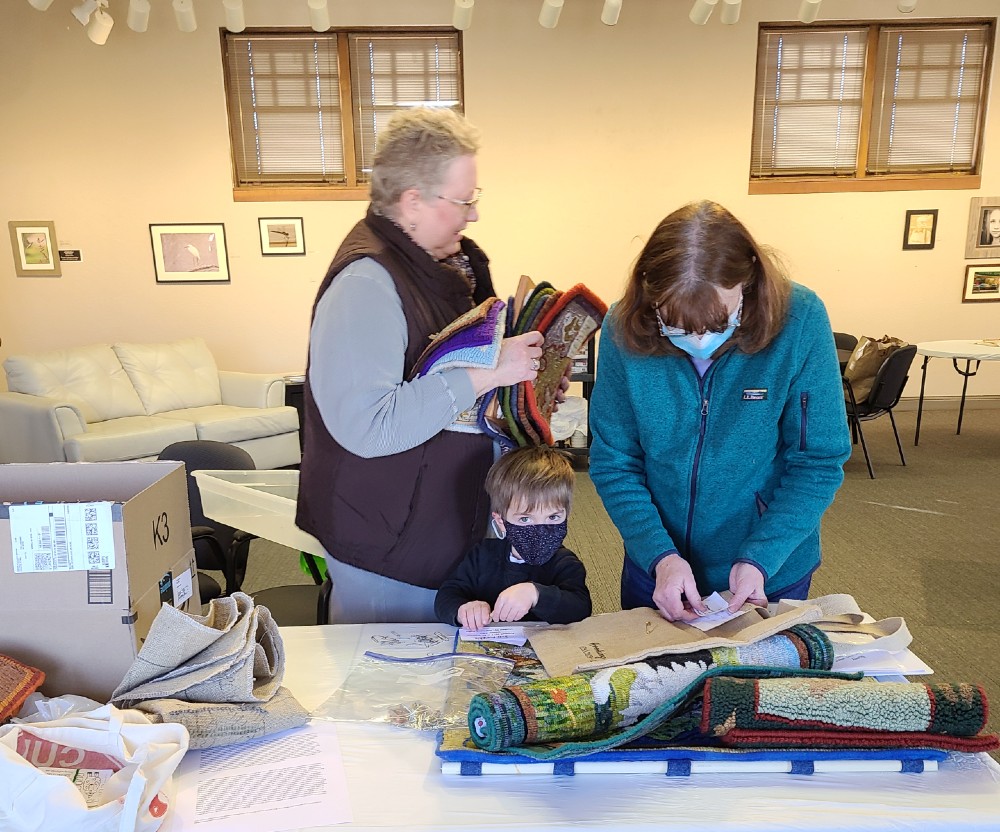 Ruggers Marianne Relka, left, and Libbey Lundgren sort through the rugs and art pieces with the help of Grayson Carrizales, Lundgren's grandson. RRN/Guzman

Rugs will adorn the walls at the West Nebraska Arts Center in March with an exhibit by the Hole in the Wall Traditional Rug Hookers.

The West Nebraska Arts Center will host an opening reception Thursday, March 4 from 5 to 7 p.m. with appetizers, and refreshments.

The exhibit will include around 90 handmade wool and other media rugs from the group of area fiber artists.

“I use wool, I dye my own wool, I use all different kinds of wool I can find, I don’t do much recycling, but some of the people in our group do,” said Libbey Lundgren. She began the group after offering classes at the Fiber Arts Fair.

The art of rug hooking began in the 1800s but didn’t take off until the 1900s when burlap became readily available to people from the textile industry.

“It (burlap) was a better backing, it lasted longer and then it got to the point where people were dying their own patterns,” Lundgren said.

The “ruggers” enjoy the craft for many different reasons. Judy Wilson finds the craft not only a good one to socialize with other fiber artists but also relaxing.

“It’s so easy and so relaxing, it’s something people can do if they are looking for something different to do. It’s usable and if they have used up all their wall space in their house they can start using the floor (for art),” Wilson said.

Many of the traditional hooked rugs on display in the exhibit will have a variety of patterns from geometric to animals and outdoor scenes.

Marianne Relka has been a rugger for six years and done everything from pillows to potholders and rugs. She enjoys using wool, a variety of clothes, yarns and beads.