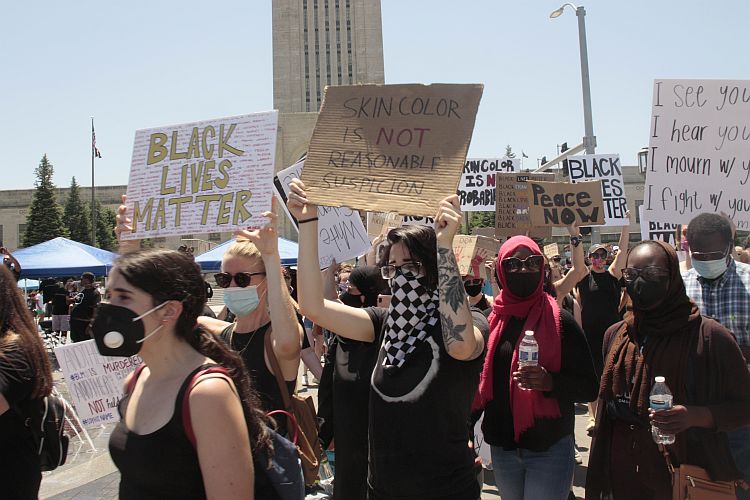 Protestors gathered around the Capitol with Husker football icons on June 13 to march for policy change and police reform amid high-profile killings of black people around the country.

Crouch discussed his willingness to support the movement and noted his children’s potential for creating change.

“It does start at home. You can make a difference in your children’s lives. You really can. And then they make differences in other people’s lives,” he said.

Opening a Bible in front of the Capitol steps, Brown opened with a speech that recalled the story of The Good Samaritan and pushed those listening to find Jesus.

“I hope today, you decide, to trust your life over to Jesus Christ and allow his life to permeate yours. It will rock your world,” Brown said. “That is the only answer to not only this situation, but every other.”

Some signs hoisted by protestors listed victims of police brutality, displayed the rallying slogan “Black Lives Matter,” which demanded an end to systemic racism and paid in memoriam to James Scurlock, a protestor who was fatally shot by a white club owner in downtown Omaha on May 30. Marching from the Capitol to the edge of the University of Nebraska-Lincoln’s campus and back, the group chanted the names of George Floyd, Scurlock and Breonna Taylor, a woman fatally shot March 13 by police in Louisville, Kentucky.

Despite temperatures in the high 90s, the demonstrations drew in hundreds of people dressed in black and continued the national wave of protests sparked by the death of Floyd, a man who died in Minneapolis police custody on May 25. The day was split between two marches held in collaboration with one another, starting with the “NOT ONE MORE LIFE. March” at 10 a.m., which combined with the Black Lives Matter march at noon.

The second march met at the University of Nebraska-Lincoln’s student union at noon. The march began when a group of student activists chanted, “Say his name.” Marchers responded, “George Floyd.” The whole way to the Capitol, the demonstrators chanted words about ending violence and racism.

During the protest, drivers honked their horns in unison. Demonstrators circled the fountain in front of Andersen Hall. A student activist ran around with an American flag chanting the names of black victims of police brutality.

Williams, the former Husker player, started the march with a moment of silence.

Before turning the crowd’s interest from the Capitol toward the march’s path through Centennial Mall, Williams read a poem in which he described what it was like to grow up with a father who was incarcerated, and how that persuaded him to lose faith in the policing system. The goal of today’s march, he said, was to enact policies that police the policing system.

“If policies don’t start to get in place like next week, it might be too late,” Williams said.