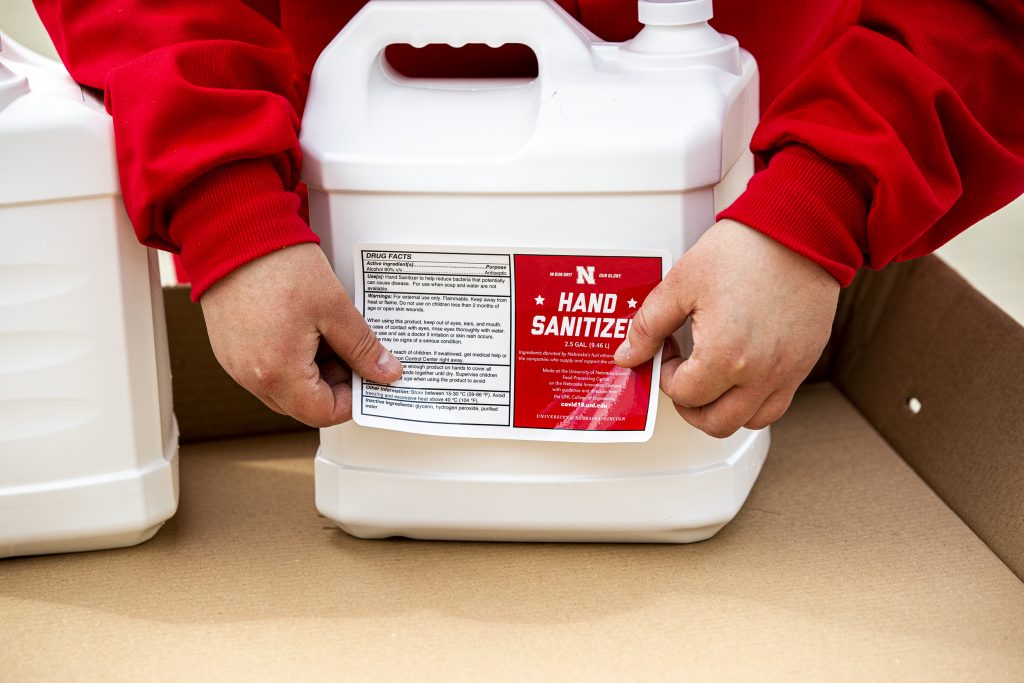 Sarah Herzinger applies labels to the hand sanitizer. Hand sanitizer is being made at Nebraska Innovation Campus thanks to a collaboration between the Food Innovation Center and the Nebraska Ethanol Board. April 6, 2020 Photo by Craig Chandler / University Communication

The University of Nebraska–Lincoln is partnering with the Nebraska ethanol industry to produce hand sanitizer for use by hospitals, nursing homes, doctors’ offices and other health care providers in Nebraska and nearby areas.

After a successful initial run April 5 at the Food Processing Center on Nebraska Innovation Campus, the partners completed their first full day of production April 6.

The project began in mid-March, when Hunter Flodman, an assistant professor of practice in chemical and biomolecular engineering at Nebraska, and the Nebraska Ethanol Board began working with the federal Food and Drug Administration to relax its regulations so that fuel ethanol producers could provide their product to create hand sanitizer. Flodman serves as technical adviser to the Nebraska Ethanol Board.

“After hearing about shortages of hand sanitizer, we hoped we could find a way to overcome some of the obstacles our fuel grade ethanol producers were facing — including navigating the FDA’s regulations,” Flodman said. “This partnership with the Food Processing Center is key. Without them, we would not have been able to make this happen.”

More than 20 organizations are participating in the effort to provide important supplies to hospitals at no cost.

Nebraska Medicine, for example, uses up to 132 gallons of hand sanitizer each day, according to CEO James Linder.

After the first full day of production, the team is poised to send more than 2,000 gallons of hand sanitizer with 80% alcohol to hospitals, doctors’ offices, nursing homes, first responders and other facilities in need. They anticipate thousands more gallons by week’s end.

Roger Berry, administrator for the Nebraska Ethanol Board, said that some of Nebraska’s 25 ethanol plants have idled down because of storage problems and the economics of the energy market right now. Several Nebraska ethanol producers are donating their products nationally to hand sanitizer manufacturing efforts.

At this time, Green Plains Inc. and KAAPA Ethanol are donating ethanol for this project, while BASF, Cargill and Syngenta are providing other required chemicals. Sapp Bros. is collecting ethanol from the plants, storing it at its facilities and delivering it to NIC in small batches where Flodman, Food Processing Center employees and a team of student workers combine the ingredients and dispense it into 2.5-gallon jugs for distribution.

Flodman brainstormed with Jan tenBensel, a Cambridge, Nebraska, farmer and board chairman for the Nebraska Ethanol Board, to identify facilities and procure donated supplies for the project. In late March, Mark Riley, associate dean for research for the Nebraska College of Engineering, contacted the director of the Food Processing Center about using that facility as a production site.

Flodman worked virtually around the clock to design the production model, one that could produce up to 5,000 gallons per day if necessary and if supplies remain available, Howell said.

The hand sanitizer production won’t interrupt other work at the Food Processing Center, Howell said. Some of the center’s national and international clients have not been able to travel to Nebraska to do their work during the coronavirus crisis. The center has been able to do some work remotely while keeping clients informed of progress. In addition, some local clients are working at the center while observing social distancing protocols.

Flodman and the Nebraska Ethanol Board joined a national effort to persuade the FDA to relax its regulations. Under temporarily relaxed standards, the FDA will not prosecute or find fault with a plant for providing ethanol as long as it’s 94.9% alcohol.

In addition, the recent federal stimulus package gave temporary relief from an alcohol excise tax that could have resulted in more than $100,000 in taxes to the project.