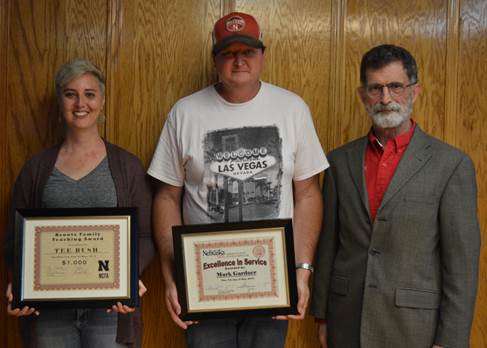 CURTIS, Neb. – Excellence and dedication exemplified by the faculty and staff of the Nebraska College of Technical Agriculture are valued traits.

Year-end awards were recently announced at an appreciation luncheon for all campus employees.

An awards selection committee sought individuals who made a difference for the NCTA student body and the entire campus community, said Mary Rittenhouse, agribusiness professor and committee chair.

“Multiple nominations were received in each category,” Rittenhouse said. “I think we all agree that this was not an easy task as all of the nominations not only met the criteria for the award but also went beyond.”

The Excellence in Service Award went to Mark Gardner of the custodial and security department. Gardner is well known around Curtis for assisting individuals on and off campus.

“If we would take a poll, I bet there would not be too many people who do not have a story of how Mark aided them in their time of need,” Rittenhouse noted.

“He is the go-to person to find stuff, always helpful and cheerful,” she read from nominations. “It doesn’t matter what time of day or night, if a student needs assistance with a dead battery or if their vehicle is stuck (on or off campus) they know who to call to save the day.”

Gardner started his employment with NCTA in October 2000.

Tee Bush, associate professor of math and horticulture, received the Bruntz Family Award for Teaching. She joined the NCTA faculty in September 2010.

The award was established in 2016 by an alumni couple, Ann and David Bruntz of Friend, in tribute to their daughter, Julie, who also was an alumna of the NCTA vet tech division. She passed suddenly in August 2016.

Recognizing the extraordinary impact an NCTA faculty member can have on students, David and Ann chose to recognize faculty at their alma mater.  The award comes with a cash prize.

“Andrea spoke of her instructor’s passion to not only teach subject matters but also life skills and values,” Rittenhouse said.

“She never made me feel like I was beneath her,” Burkhardt shared. “I always felt like I had a voice and my voice mattered.  I feel that she looked out for me, as well as her other students, more than we realized.”