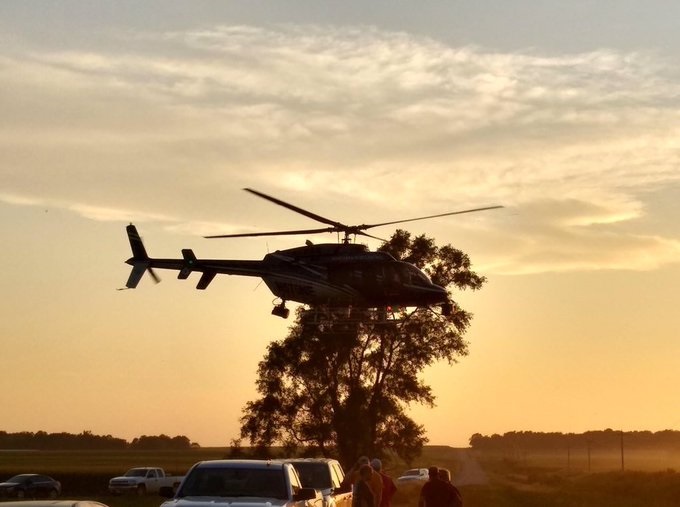 AUGUST 7, 2019 (TEKAMAH, NEB.) — Thanks to the combined efforts of several law enforcement agencies and emergency responders, a missing, elderly woman was located and rescued last night near Oakland.

The Burt County Sheriff’s Office received a report of the missing woman at approximately 12:00 p.m. Tuesday. They immediately mobilized and located the abandoned vehicle she was driving,
and called in partners from Oakland Fire and Rescue, Lyons Fire and Rescue, Nebraska/Iowa Spray Service, and Har-Mor Spray Service who were in the area and agreed to assist.

The Nebraska State Patrol Aviation Support Division also responded to search from the air with the NSP helicopter. They were ultimately able to locate the woman, who was lying down in the field approximately a mile away from where her vehicle was located.
At approximately 8:00 p.m., the helicopter landed in the field and found that the woman was conscious, but unable to move herself.

One of the pilots picked her up and carried the woman to
the helicopter to fly her out of the field. She was flown to an Oakland ambulance that was standing by, where she received initial care
before being transferred to the hospital in Oakland. She is now reported in stable condition.

Burt County Sheriff Bob Pickell said, “I want to thank all the agencies, fire/rescue and the friends and neighbors that responded and assisted in the search. It is a great example of what teamwork can produce when a quick response is needed. Without this concerted effort, the outcome could have been a lot worse.”

“This was a prime example of the teamwork we see every day from first responders in Nebraska,” said Colonel John Bolduc, Superintendent of the Nebraska State Patrol. “From the information gathered by the Burt County Sheriff’s Office, to the aerial search by the NSP helicopter, to the care provided by the Oakland Fire and Rescue, this was a team effort that brought about a great outcome.”