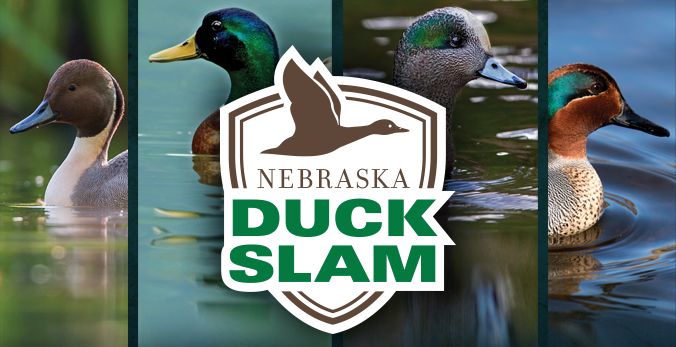 LINCOLN, Neb. – When Janice Spicha shot a northern pintail on a Harlan County duck hunt Nov. 18, she said “it was like winning the lottery.”

Not because that bird gave her a Nebraska Duck Slam, making her the first female to complete it this season.

“A pintail is kind of elusive out here at times,” the 73-year-old Alma hunter said. “I knew it would be the hardest duck to get. Pintails have been few and far between.”

The Nebraska Duck Slam challenges hunters to harvest a teal (blue-winged or green-winged) of either sex, as well as drakes of three other species: an American wigeon, a mallard and a northern pintail. All ducks must be harvested in Nebraska, and hunters must upload a photo of each harvest at OutdoorNebraska.org/DuckSlam. All hunters who complete the slam during the 2020-2021 season will be registered to win one of several great prizes generously donated by Ducks Unlimited.

This is the second year of the Nebraska Duck Slam but Spicha’s first year participating.

“I love to duck hunt, but I hadn’t paid much attention to it,” she said. “Then I saw something about it on Facebook, so I thought I would try it.”

Spicha is one of 104 hunters to complete a Duck Slam this season, including one other female. In total, 283 hunters are participating.