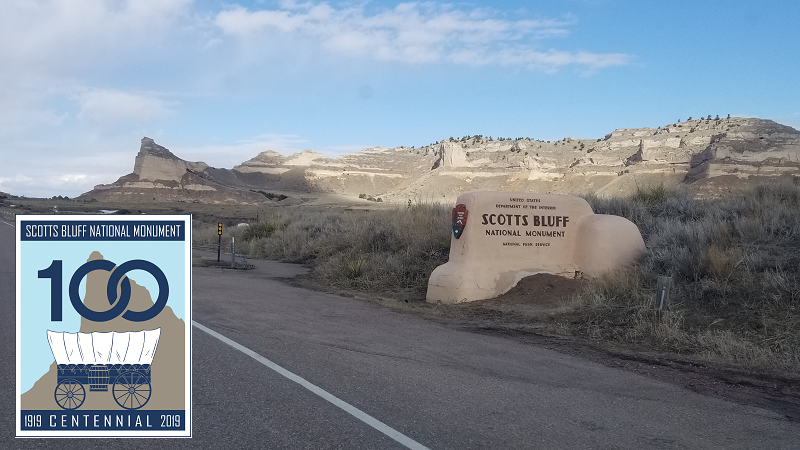 The community is invited to share in the celebration of Scotts Bluff National Monument’s 100th anniversary on Thursday, December 12th at 6:00 p.m. at the Gering Civic Center.

On this date 100 years ago, President Woodrow Wilson signed the President Proclamation officially establishing the first national monument in Nebraska. Today, the 3,003 acres of rugged bluffs, historic overland trail remnants and prairie protected by the National Park Service would not have been possible without the elected officials, leaders and citizens of Gering and Scottsbluff who petitioned the government to preserve this land for future generations.

“The centennial of Scotts Bluff National Monument is really a celebration of community. A celebration of persistence and drive to make things happen to benefit the common good. It’s incredible what a community can do when they come together. In this case, the creation of a national monument which is beloved by the community and visitors from around the world,” adds Centennial Coordinator Kayla Gasker.

The event will start with local elected officials reading a proclamation to commemorate Scotts Bluff National Monument’s centennial and remarks by Superintendent Dan Morford. Winners of the centennial Photo Contest will be announced followed by an interpretive program presented by Chief Ranger, Justin Cawiezel. There will be numerous historical photos and displays to view including a copy of the original Presidential Proclamation signed by President Woodrow Wilson and the petition to the government from local community leaders. The Oregon Trail Days Quilt Show centennial challenge projects will also be on display. The Oregon Trail Museum Association will have special centennial merchandise for sale, including the limited edition coffee table book, “Scotts Bluff National Monument: Through the Years,” pins, t-shirts and magnets.

Cake and punch will be served. The event is free and open to everyone. The first 100 attendees will receive a free centennial keepsake ornament. There will also be door prizes including two “Nebraska. Honestly, it’s not for everyone” swag gift sets and University of Nebraska Husker commemorative sports publications, provided by the Nebraska Tourism Commission. The Centennial Committee would like to thank B & C Steel and Johnson Cashway Lumber Company for being community partners for this event.