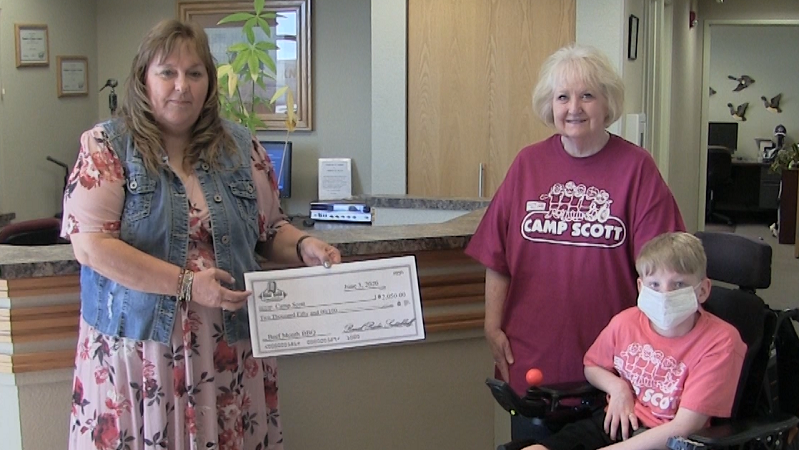 Camp Scott won’t be able to offer its traditional five week camp this year due to the virus pandemic, however, a check presented Wednesday of proceeds from the Rural Radio Scottsbluff Beef Month BBQ will help them with other safe activities.

Rural Radio Promotions Director Kendra Feather says the annual end-of-May event raised its highest amount ever, $2,050, despite the fact it, too, was impacted by the need to maintain social distancing. “We made a drive-up and go, and sold out 200 hamburgers in one hour, and raised the most money we ever have in the BBQ,” said Feather, “and we had an anonymous donor that helped us go over the $2,000, so it really worked out.”

On hand to accept the proceeds of the event were camper camper Carson Newberry and Penny Businga with Camp Scott, who said the activities of the organization this year will be a bit different as well. “Because it’s hard for these kids to wear masks and be in tiny groups, we’re not having our official (5-week) camp this summer,” said Businga, “but we are sending the kids to the zoo for a day when they can go with their parents and be safe, and then we’re going to have a family fishing day and picnic in August.”

A number of local businesses partnered with Rural Radio Scottsbluff for the event, including Paul Reed Construction and the Big Green Egg for cooking up the hamburgers, Runza helping out with cookies and condiments, chips donated by ARC Services, Lemonade ICE from High Plains Budweiser, water donated by Pepsi, and Panhandle Co-op Main Street Market helped with the cost of the hamburger.