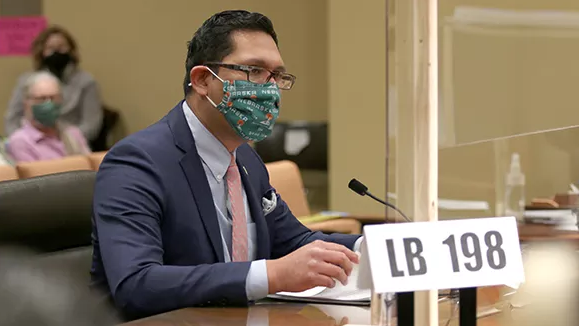 The Legislature’s Education Committee heard testimony Feb. 9 on a bill that would change several provisions in the Student Discipline Act related to suspension, expulsion and mandatory reassignment.

Omaha Sen. Tony Vargas, sponsor of LB198, said the proposal is identical to LB515, a bill he introduced last year that was passed by the Legislature and vetoed by Gov. Pete Ricketts. Vargas said the proposed changes and clarifications would make the student discipline process more fair for students and families.

The bill would require that a student be given an opportunity to complete any classwork and homework missed during a suspension, including examinations.

It also would require school districts to reinstate a student after an expulsion and accept certain non-duplicative, grade-appropriate credits earned by the student during the expulsion.

Among other changes, LB198 would require a principal to decide to discipline a student by long-term suspension, expulsion or mandatory reassignment within two school days after learning of the alleged misconduct.

Under current law, a student is subject to those penalties if they cause or attempt to cause personal injury to a school employee, school volunteer or student unless the injury was caused by accident, self-defense or an action taken on the reasonable belief that it was necessary to protect another person.

Under the bill’s provisions, personal injury would be considered accidental “when the damage or consequences of the act that caused the injury were unintentional, unforeseen or unexpected.”

LB198 also would modify procedures for student discipline hearings. A student or the student’s parent or guardian could request the designation of a hearing examiner other than the hearing examiner recommended by the superintendent. Schools would pay the examiner’s expenses and fees.

Elizabeth Eynon-Kokrda testified in support of the bill on behalf of Education Rights Council. She said the change is important because some families do not view hearing examiners, who often are school district employees, as impartial.

“Having the impression and the feeling of true impartiality in a hearing is really critical for families,” Eynon-Kokrda said.

Rose Godinez of the ACLU of Nebraska also testified in support. She said suspended and expelled students often are unsupervised and easily can fall behind on schoolwork, increasing their likelihood of dropping out and entering the juvenile justice system.

Godinez said the bill would keep more students out of the school-to-prison pipeline by protecting their due process rights and allowing them to keep up with coursework without having to attend an alternative program.

David Kramer testified in opposition to the bill on behalf of Omaha Public Schools. He said changing the definition of a personal injury caused by accident would allow a student who injured another student or teacher to avoid discipline by claiming that they did not intend to hurt anyone.

Additionally, Kramer said, two days is not enough time for principals to thoroughly investigate student misconduct, and requiring schools to pay for independent hearing officers would be expensive.

The committee took no immediate action on the bill.