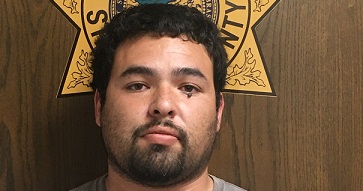 On Tuesday morning just before noon, the Stanton County Sheriff’s office arrested a 28-year old rural Pilger man on a U.S. District Court Felony Arrest Warrant for being a Felon in Possession of a Firearm. Jose E. Garcia was taken into custody at a Norfolk business on east Hwy 275 after being tracked to that location. Garcia was wanted on a federal indictment that was processed earlier this year by the FBI. The Sheriff’s office was notified on Monday evening of the warrant and was able to locate Garcia and arrest him without incident. A child with Garcia was taken into protective custody and returned to his mother. Garcia has an extensive criminal history and was jailed pending his custody transfer to federal authorities.