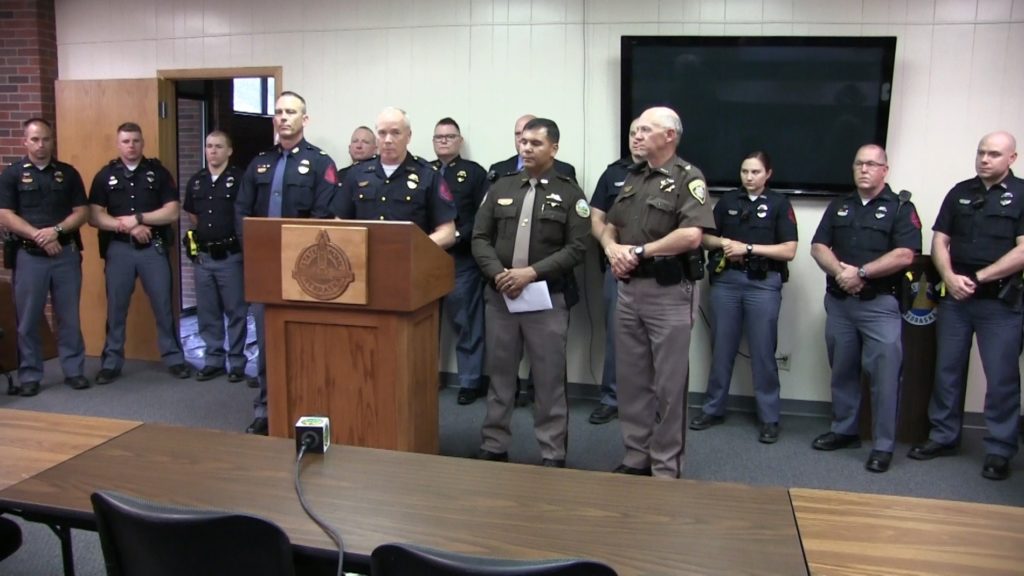 Nebraska State Patrol Superintendent Col. John Bolduc joined members of Troop E in Scottsbluff Thursday afternoon, praising the life of Trooper Jerry Smith and the example he set for everyone in the agency.

Smith died from injuries suffered in a three-vehicle crash west of Bridgeport Thursday morning. Morrill County Sheriff Milo Cardenas told reporters a westbound pickup was waiting to make a left turn at the cemetery along Highway 26, and a second vehicle came from behind, swerved left to miss the pickup and hit the Trooper’s patrol unit head-on.

Troop E Commander, Captain Kurt Von Minden, said Smith drew from his experience in the U-S Army to be a leader and mentor to other troopers every day. “Even though he was a fairly short career with us, he was a friend and mentor to the younger guys, they all looked up to him. He was a family man that was dedicated to his wife, his son and his daughter,” said Von Minden “He meant a lot to the community, he took a lot of pride in being a Trooper, and being a citizen in Scotts Bluff County. He was just a tremendous man, he’s going to be greatly missed by everyone here.

Smith was a decorated war veteran, receiving the bronze star, and served two tours in Iraq. Von Minden says Smith’s ability to go through the the Patrol’s basic training at the age of 47, the oldest person to do so, demonstrated will power beyond what is seen in most people.

Von Minden also said he talked with his officers following word of the accident, telling them this would be a day they would not forget.  “a lot of people go through their careers without having one of these day, and it’s an awful day to have to have, but it’s going to be etched in our memories permanently for all of us that stood here this day and have had to take care of Jerry and his family,” said Von Minden. “We will never forget Jerry.”  He says support services have been offered to officers impacted by the passing of Trooper Smith, a trooper was with Smith’s wife from the moment officials learned of the accident and the Patrol will surround the family with all the support they may need.

Details on services for Smith are pending. The name of the driver of the other vehicle, who also died in the accident, has yet to be released.