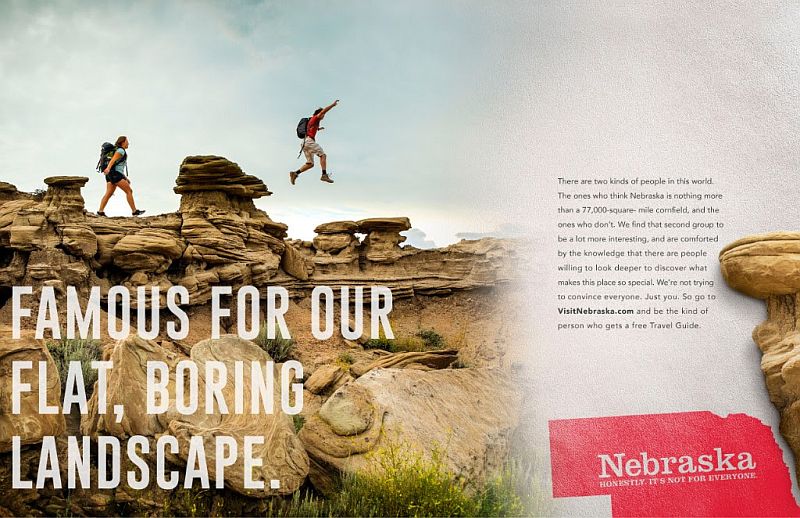 NEBRASKA CITY, Neb. (October 17, 2018) – Nebraska may not be on everyone’s bucket list of places to visit, but if you like experiences that are unpretentious and uncomplicated or if you enjoy escaping the big city life for moments of solitude in the open plains, creating your own fun or exploring the quirkiness the state has to offer, chances are, you will like it here.

In 2017, before creating the campaign, the Nebraska Tourism Commission had Brand Lever, a brand consultancy specializing in destination marketing, conduct research. They discovered that consumers don’t consider Nebraska a leisure travel destination, and because they don’t view the state that way, most won’t put forth the effort to find or research things to do here. Therefore, the goal of this new campaign is to change the perception there is nothing to do in Nebraska.

“It was important to the Nebraska Tourism staff, marketing committee and Commissioners to be true to who we are and honest about what we are not.  Along each step of the way we were heavily involved in discovering ourselves and what those outside of our borders thought and felt,” said Deb Loseke, Nebraska Tourism Commission Chair and Columbus/Platte County Convention and Visitors Bureau Executive Director. “So we discovered that we can’t offer something to everyone – but to those that we can, this campaign speaks to their sense of adventure and discovering what we as Nebraskans are all about.”

“What we set out to do is create a brand that is rooted in a core human value that is shared by Nebraskans and potential visitors to the state,” said John Ricks, Nebraska Tourism executive director. “The new brand platform is defined by honesty. The overarching concept of honesty is rooted in a mindset that values transparency, purity and simplicity. A way of embracing the not-so-obvious bits of life. We feel we’ve accomplished just that.”

In spring of 2018, the campaign was tested in key out-of-state markets that have the greatest potential to deliver visitors. Testing proved that the advertising effectively overcomes significant hurdles Nebraska faces as a leisure destination, the campaign increased likelihood to visit for most or increased their potential time in the state. Respondents also recognized and understood the self-deprecating humor and it worked well for them, in fact, the humor is a key reason why the campaign was so well received.

“I think the brilliance of the campaign is it captures the essence of who we are in Nebraska, while also understanding the type of consumer who is attracted to who we are and speaks right to them,” said David Fudge, Nebraska Travel Association (NETA) president and NEBRASKAland Days executive director. “It also frees those of us on the front lines to be authentic with people who come in to our facilities.”

The content was created from a statewide photo and video shoot in August 2018. In the advertisements you will find tanking, unique and quirky locations like Carhenge and Hollywood Candy, conservation photographer Michael Forsberg roaming the Great Plains, Toadstool Geologic Park and more.

“This campaign rollout and release is a perfect example of a team of tourism professionals working together to grow our state and the coinciding economic impact of tourism,” said Jeff Maul, Lincoln Convention and Visitors Bureau executive director.

The look and feel of the campaign will carry over into VisitNebraska.com, the official Nebraska Travel Guide and on social media using #HonestlyNE.

The new campaign will begin in spring of 2019 in key out-of-state markets.