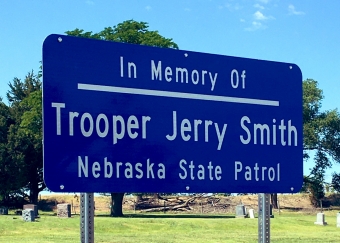 Family, friends, and colleagues gathered Saturday near Bridgeport to honor the memory of Trooper Jerry L. Smith #373, who was killed in the line of duty on June 20, 2019. The event marked the completion of a year-long journey by Trooper Smith’s daughter, Mechelle, to run 373 miles to honor her father.

“After I returned home from his funeral, I was reading through emails that he had sent me when he was in Iraq. In one he stated, “If you’re bored and you can’t find anything to do, go run,” said Mechelle Smith. “I stared at that email for a while thinking about how one of the things that I love most in life was introduced to me by my dad. I was going to keep running, but for him.”

At the conclusion of the run, the Nebraska State Patrol unveiled a new sign on Highway 26, created by the Nebraska Department of Transportation to honor Trooper Smith.

“Today is a day about remembering,” said Colonel John Bolduc. “Jerry’s memory is going to live in our hearts, and that’s what remembering is about.”

Troop E Commander Capt. Kurt Von Minden told KNEB News he was proud of how his staff has been able to carry on and remember Jerry in their daily lives. “If you walk around the (Troop E) building, there are mementos of Jerry in just about every portion of the building. People put together collages, there are pictures of Jerry… Everybody has kind of taken to remembering him in their own way, and it’s almost impossible to be in the building without seeing someone’s remembrance of Jerry. He had that big of an impact on the troopers here.”