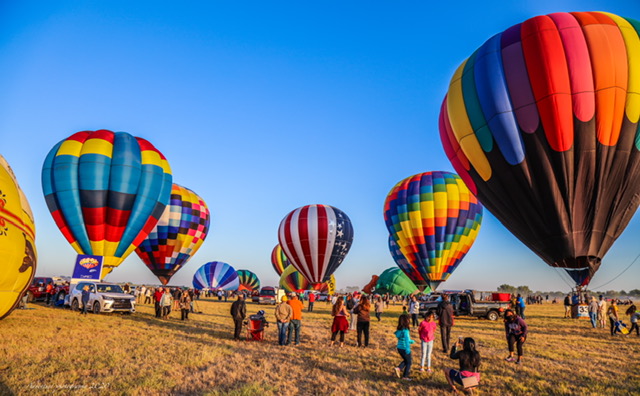 Following a final morning of competition balloon flights Sunday, organizers of the Old West Balloon Fest said they were very pleased with the public’s embrace of the modified event.

Executive Director Colleen Johnson said all the pilots were excited about coming back next year, and the Night Glow at Five Rocks Amphitheater was a huge success, with final attendance figures to be released later in the week.

Johnson said a handful of Balloon Fest craft joined the competition pilots, who wanted an extra day of competition to make up for the launches that had to be scrubbed due to weather on Friday. She said one pilot from Texas approached her, and he really summed up the event in a nutshell by thanking the area for hosting the event, and noted it was the only one held for the Balloon Federation of America this year.

Johnson noted the organizing committee and volunteers worked very hard to put on a safe event during a difficult time, especially when back in April, the fate of the event was in limbo due to the virus pandemic. “You know, being able to get out again, and be with people… I mean, who doesn’t like to watch hot air balloons fly and glow,” said Johnson. “It was really nice to have that outlet, and have something to look forward to.

However, there’s no rest for Johnson and the other organizers, as she says you have to start planning now for next year’s event, otherwise there’s the tendency to forget what didn’t go right, and what you want to improve on. “I’ve got a long list of things I want to change for next year, and things that will make the event better and better,” said Johnson. “I’ve talked to folks that run another big event here and they said they’ve been running it for years and you’re always changing and making things better, and that’s what we want to do for Balloon Fest.”