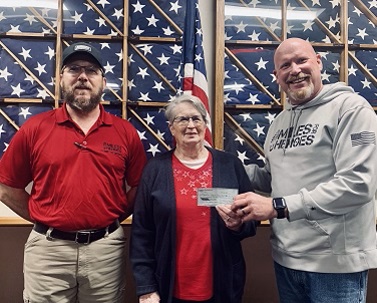 SCRIBNER — Carol Verbeek can see the light at the end of the tunnel. “And it’s getting bright,” she said.

After speaking with Scribner’s Economic Development Director, Elizabeth Valla, about her American Legion Auxiliary needing more funds for their Gold Star Mother project, it was just a matter of time before word spread like wildfire.

Verbeek has been working tirelessly with her Unit 121 auxiliary members to raise funds to honor every mother in Dodge county who has lost a child while in active duty serving their country. She started the project in 2016 with 30 mothers to honor, either presenting them with a gold star if alive or marking their grave with a gold star.

Since starting, the group has honored 185 gold star mothers, two-thirds of the funding for the county, coming from Scribner residents.

But money had simply ran out, so she called up Valla, trying to find grants or ways to raise funds to catch up with the 77 more mothers they had in Dodge County.

Valla spoke with the town’s chief of police and marine veteran, Jake Brainard, he immediately had an idea. Brainard then called up Joel Marreel with Miles for Heroes, an organization that raises funds for wounded soldiers. Brainard and Marreel serve together on the organization’s committee. Within 30 minutes of Valla being off the phone with Verbeek, Jake and Joel already had her added to the next day’s committee agenda.

“We don’t mess around, we get things done here in Scribner,” Valla said. The next night, the committee called up Verbeek, telling her the good news. She was shocked.

“This is kind of in the wheelhouse for what Miles for Heroes does,” Brainard said. “We (Miles for Heroes) raise awareness,” Marreel added. The next week, Marreel and Brainard presented Verbeek with the exact amount she needed to honor those 77 mothers, $2,000. 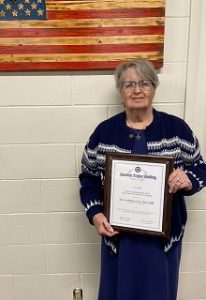 “My stress level has gone down immensely,” she said, adding she had no idea where the funding was going to come from.

As Marreel handed her the check on Friday afternoon, the smile on her face said it all. Her unit was recently recognized on a national level for their efforts in not letting the country forget the sacrifice these mothers made for our freedom. This project is near and dear to Verbeek’s heart as her grandmother was a double gold star. Verbeek’s father who had died in Belgium in 1944 and her uncle who was a prisoner of war in Korea and never returned. 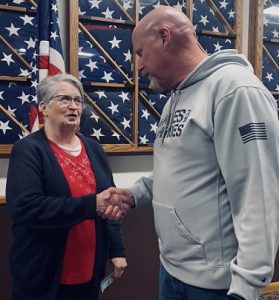 Her late husband’s grandmother was also a gold star mother. Because of Verbeek there will also be a new plaque added this summer to the new Veterans Park, on Military Avenue in front of Sidner Ice Arena, dedicated to gold star mothers. She, along with her Scribner unit, are working to put together a directory that will list all the names of the mothers, the child they lost, their child’s rank in the military, along with where their child is buried and if the mother is alive, and if not, where she is buried. “I‘ve worked 4.5 years on this and I don’t want to do it halfway,” Verbeek said. She is always researching and finding more gold star mothers, so if you’d like to donate to the unit’s efforts, you can do so by sending donations to Gold Star Committee, 108 8th St, Scribner, NE 68057 or for more information, contact Valla at econdev@scribner-ne.gov.

Miles for Heroes will also be holding their annual fundraising event Freedom Fest in Scribner on May 21st. For more information on the bands, 5k and poker run, check out their Facebook at Miles for Heroes or www.milesforheroes.com.