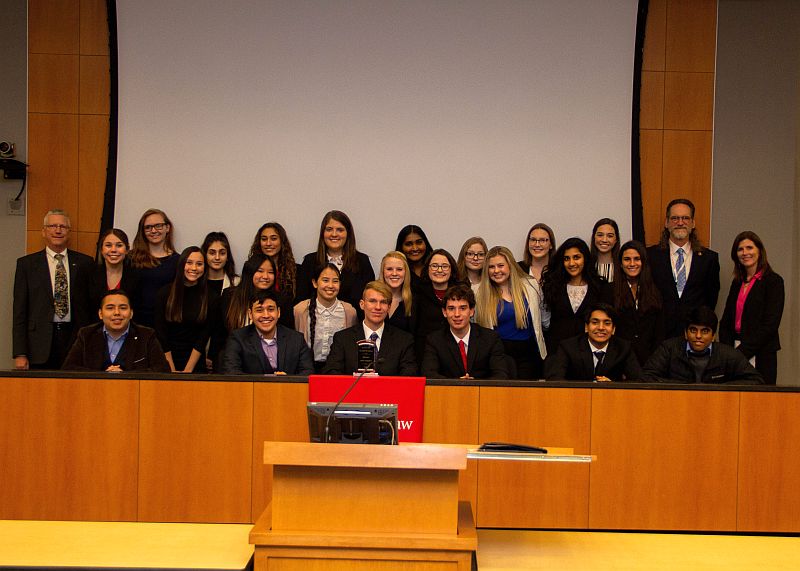 Lincoln, Neb. (December 10, 2020) – Lincoln East High School is the 2020 winner of We the People: The Citizen and the Constitution, a high school program sponsored by the Nebraska State Bar Foundation. The competition was Jan. 8 at the University of Nebraska College of Law.

The Lincoln East team members and their teacher, Kevin Rippe, will represent Nebraska at the national We the People competition in April in Washington, D.C.

“We the People involves students in real-life situations and issues. It puts students in a scenario where they have to think on their feet and use their knowledge as well as critical thinking skills to answer questions on issues relevant to our political system and our community. I have had students who have changed their college majors or career plans based on their experiences in We the People,” Rippe said

The runner-up team is from Lincoln Southeast High School and is taught by David Nebel.

Members of the judiciary, lawyers, educators, state government officials and community volunteers served as timers, facilitators and judges for the annual competition. The We the People classroom curriculum is devoted to the history and principles of constitutional democracy in the United States.

“Wow! I am so impressed,” Riedmann told the students. She said the competition required them to think on their feet, reason, analyze and “take the past and make it applicable to the future.” The competition also promotes valuable life skills, she said.

“I urge you to stay involved in your government. You are the people for whom our government was formed,” she said.

Carrier said the We the People curriculum fosters attitudes necessary for students to participate as effective, responsible citizens and complies with Nebraska State Standards for civics and government. She thanked students for participating and reminded them that We the People provides them with a foundation to “embrace the Constitution and use it in the future to solve national problems.”

Teams of three or four students presented essays and answered questions before panels of judges in the state competition. The questions were focused on the following units of study in the curriculum: