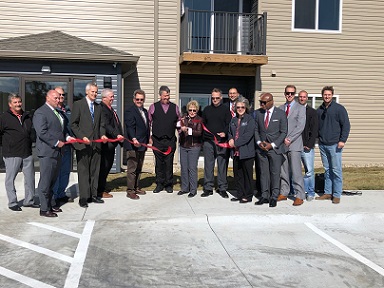 The 24-unit Eastview Apartments are not only Nebraska’s first multifamily apartments to be funded by LB 518 — they’re also Schuyler’s first new apartment development in over 20 years.

“The Rural Workforce Housing Investment Act is doing exactly what it was intended to do: give vibrant communities like Schuyler a financial tool to invest in their housing stock and accommodate an expanding workforce,” said Lt. Gov. Foley. “This is an outstanding achievement that will have a tangible effect on Schuyler’s economic growth for years to come.”

Signed into law by Governor Pete Ricketts in 2017, LB 518 was designed to address an increasing need for affordable workforce housing options in rural Nebraska. The Act channeled approximately $7 million from the Nebraska Affordable Housing Trust Fund into a new fund dedicated to rural workforce housing development.

The Eastview Apartments, spearheaded in partnership between Schuyler Community Development, Inc. (SCD) and a private developer, feature six one-bedroom, 12 two-bedroom and six three-bedroom units priced at the market rate of $700-$1,150 per month.

“The Eastview Apartments are a game-changing opportunity for Schuyler to attract and retain employees at its local businesses and industries,” said Brian Bywater, Community Housing Specialist for SCD. “Studies have shown that there is less absenteeism from work and people are more likely to participate in local activities when they actually live in the community. We are excited for the continued housing growth in Schuyler, and intend to keep the ball rolling.”

The Nebraska Department of Economic Development (DED), which administered LB 518 on behalf of the State, awarded the crucial $810,000 in Rural Workforce funding to SCD last year. SCD matched that amount with over $950,000 in public-private investments. Combined, this created a fund of more than $1.7 million for workforce housing investments.

Today’s ribbon-cutting is only the latest in a series of workforce housing victories brought on by LB 518. DED estimates that nearly 600 rental and owner-occupied units have already been planned, built or rehabilitated in 12 communities across the state with LB 518 support, with total project costs valued at over $71 million. Even more investments, the Department says, are forthcoming.

“It’s safe to say the Governor and Lieutenant Governor are going to be invited to a lot of ribbon-cuttings in the coming months and years as a direct result of LB 518,” said DED Director Anthony L. Goins. “Communities have truly embraced this opportunity to address their workforce housing needs and challenges, and there’s real forward momentum and progress happening throughout the state.”